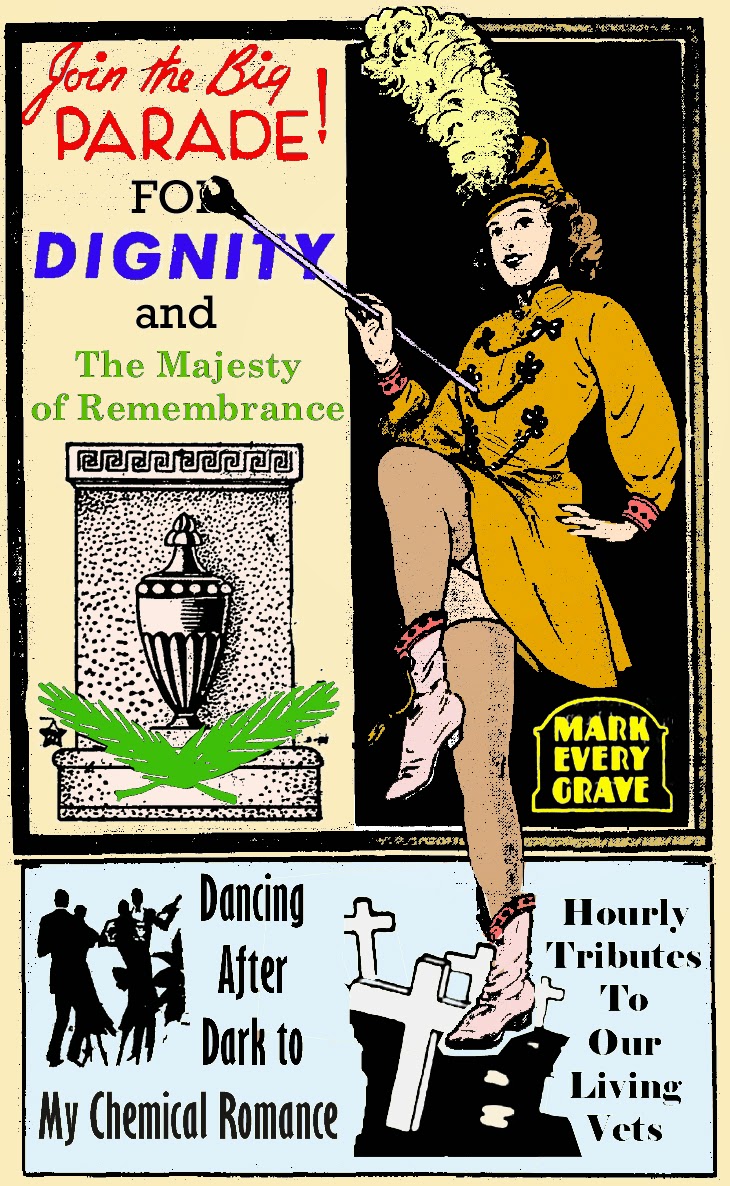 Happy Memorial Day! I always think about that "happy" and whether it's appropriate, but I've heard it enough, it must be right.

I'm not doing much for Memorial Day, as usual. They fought and died for my right to sit on my lazy buttootie, so I'll honor that. No trips to the cemetery -- I hate crowds. I'll miss the parade -- looks cloudy, hate to get wet. I'd put the flag out, if I had one. I'm just in a terrible way.

The parade, you've seen one truck of waving vets, you've seen 'em all.* Although it is quite cool how they have the trucks festooned with little flags. I can just see the folks doing that, taking hours sticking those flags on. I honestly can't remember how they even do it, tell the truth. Surely there aren't little flag holders everywhere on an Army truck. What would that be, some kind of retrofitting? Or are we spending so much extra time and money in military procurements to make sure our trucks have 800 flag holders?

That'd be worth looking into. That might be why a lot of guys died. They're trying to scurry off a truck that's been hit and they're caught on a flag holder. So many of them, it's like a mine field. Like all that barbed wire they had in World War I, between our trenches and theirs.

World War I. This is a big year for World War I, because it's been 100 years since it started. I was talking to a guy the other day, a geezer, really, except I've known him since high school. He reportedly spends a lot of time and money on war literature and other mementos. Civil War through whatever; probably has an empty room ready for the next war.

In our discussion, I quickly blew through my limited knowledge of the First World War. Which consists of everything I know of Eddie Rickenbacher, since I've been reading his book for the past six months and I'm still not done. It's interesting in places, a total boring bastard in others. I felt gratified that my old friend agreed with me on the WW I flying aces, that they wasted a huge amount of time after a hit, driving around the countryside looking for witnesses to sign for them, to vouch that it was indeed their hit. Isn't that dumb? Do you suppose every infantry man jumped out of the trenches and ran ahead to get verification that he shot a guy? Anyway, it was my theory -- and this guy, a self-taught expert agreed -- that it was only the novelty of an air corps in those early days that prompted such a stupid idea.

Grandpa was in WW I. I don't know what he did exactly. He never said a word about it. Don't remember him being in any parades. Exercising his right, too, I guess. I honestly don't remember him even going to many parades, for anything. Just sitting around the house here, going out on the half acre, moving the outhouse every couple years, and hunting and fishing. My uncles were all military guys, like in the heat of WW II, the three boys this side of the family. The other side of the family, I had a couple uncles in Vietnam.

Funny thing about that. You know how the government's always screwing the veterans in one way or another? One of my uncles who was in Vietnam, after the war, died, not war-related. Somehow the government didn't get his headstone right. They always put which war you were in, and they put "WORLD WAR II," which meant he would've been around 5 or 6 when he enlisted. They must have a big assembly line of headstones and a guy daydreaming and forgetting to change the matrix.

The way it worked out, my mom went through all the bureaucratic gyrations you have to go through, and for the length of time it takes the government to solve anything, including a relatively easy problem like this. It may or may not have involved a contact with a senator or congressman. In the end, though -- she would've made a great bull rider -- she stuck with it and they got the correct "VIETNAM" tombstone to her.

What happened to the old one? There was someone in the cemetery without a tombstone. So she took it to a stone-etcher, someone who does that for tombstones, and had a different one etched on the back, then flipped it over. So out there somewhere in "The Silent Centuries" cemetery  .... Someday, when archaeologists are excavating it, they'll go, "What the hell happened here? This tombstone has a flip side!

*My true feelings on a truckload of 90-year-old vets, is I'd love to hug and lip-kiss them and rub their head and celebrate them without end. But you can't do that. They'd look at you like a madman, which you'd be. Inside they'd be thinking, "I'm the same guy now as I was when I was 40 or 50, an average guy on the street -- or maybe even your mean boss -- and you didn't want to razz me. Why razz with me now that I'm old? You're looking down on me! You're demeaning my humanity, manhood, and sacrifice?" Which wouldn't be true, but you can't disagree with one of these beautiful old goats.
Posted by dbkundalini at 1:19 PM