This Infernal Itching -- A Thorn in My Flesh 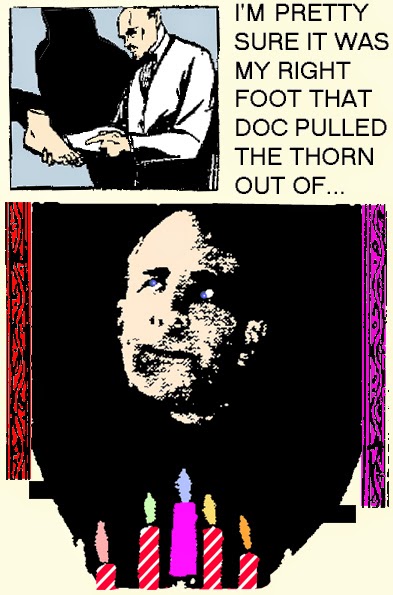 I'm loving this whole "itch-meditation" thing. Although, of course, after only a few days of it -- and with even the theoretical basis of it still so little known -- there's a long way to go. But as every journey (those on foot) begins with the first step, so too this one.

Forgive the philosophical sentiment, but that's what it's doing to me. The more I sit and stew in my own itches, forbearing scratching, the more I search for a deeper justification. One thing I hate, absolutely hate, is to launch out on something, only to find it was my own folly, then having to come slinking back with egg on my face. Like when I left home at 11, immediately got a thorn in my foot, and my parents had to take me to the ER. I seriously thought I could walk all the way north and make a go of it.

This, however, I hope is different. I'm no longer 11. I've been around, and I've probably made about every mistake I'm going to make. So I'll go by that certain knowledge, and with the stepping out on faith that's always been a part of my spiritual upbringing. I know the answers are out there, and if I can work up a previously undiscovered one and get my name on it, so much the better. I've certainly never heard of anyone doing with scratches and itches what I'm attempting.

All that said, again, I'm loving it. I've only scratched four or five times in the last day. Not out of the discomfort -- which admittedly has been immense -- but testing some stray theories on an occasional scratch being a type of reset button. The biggest bad news so far has been that my meditations aren't really leading anywhere except to this theoretical, philosophical work. So as far as "turning off my mind, relaxing and floating downstream," downstream hasn't even yet come into view.

The only visualizing I'm managing is to see the centers of itch spots as red, pulsing, nagging, terrible unrelenting bastards. Put this in your junior yogi notebook: Itches only intensify, they don't go away. And if they ever fade out on their own, it's only because three others have erupted and are much worse. I'm seriously thinking to add more scratching. It's amazing how scratching is such a relief. Nature's no dummy. The horse, the dog, and every other animal that scratches, they know something. As for elephants, they roll in mud and spray themselves. I'm totally familiar, personally, with how horses and dogs do it. But I've never rolled in mud and sprayed myself, which might be worth a try.

Or it could be that itches in meditation have to be entered without that relief. Like my soulmate Luke Skywalker, your consciousness goes cruising in, and no one thinks you can hit it, then you send a conscious charge down one persistent itch, and the whole thing blows up. Mere scratching's what everyone does, and it never gets us anywhere. Of course I'm a long ways from that.

I was watching some more science TV yesterday, and saw another show about black holes. Remember, in a previous post I likened itches as being possibly like black holes, with the rest of the aureole around the itch spot being like the rest of a galaxy? You can do all kinds of things if you get close enough to a black hole, in addition to being summarily killed. You can go back in time and be suddenly younger than everyone else. Which, if that's possible, maybe a little meditating on the spot might at least convey psychic insights. Who knows? It'd be wild to suddenly be younger than everyone else, but I can see it presenting problems when you show up at Social Security for your benefits and you look 11. Which is when I headed north and got the thorn.

Hmm, that thorn. It went in my foot. What if it just happened to hit one of these black hole points and that's why I'm like this? It's actually astounding that my foot hardly ever itches. The only constant place I get itches on my feet is between the toes, athlete's foot. Which I fought with tough-actin' Tinactin and had pretty good success at. I'm sure the thorn went in the mid section of my right foot, right where it never itches. I might have a foot with potential super powers. Am I Superfoot?

This is among the many things that need further exploration.
Posted by dbkundalini at 11:20 AM