Enjoy Your Hair, Boys, While You Can 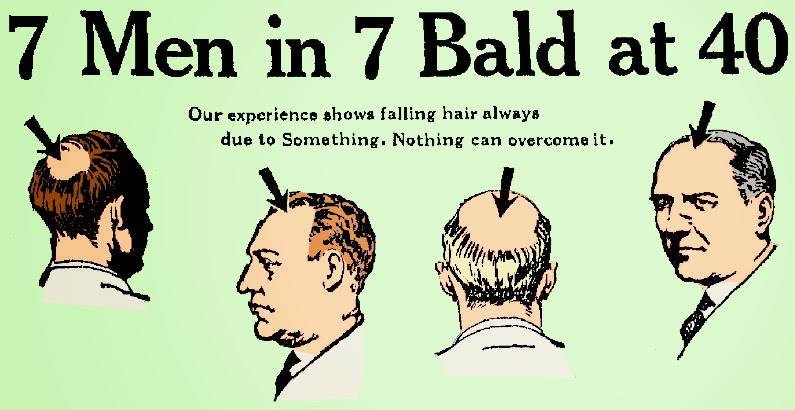 Look at these sad 40-year-olds. Take a look, guys, that's you at 40 (or less). It's gonna happen, there's no doubt about it, and there's nothing much you can do about it, in fact, nothing. I know your response: "Then I shall live like there's no tomorrow, for there isn't!" That'd be fine, except such living leads to a greater appreciation for life, making your depression at 40 that much more devastating. Better to live resigned today and spare yourself the absolute depths tomorrow.

Believe me, I know all about this subject, like every other guy over 40. I was fine at 39, then as 40 neared, I woke up every morning with entire handfuls of hair on my pillow. Soon the supply diminished, the handfuls got smaller, until the remaining supply didn't know what to do. The fact that I still have hair at the edges, much like the third guy from the left (above) is my only consolation. But there's nothing good about it. You're always tempted to try a comb over, only to be called on it by guys under 40.

This painful subject's always on my mind, of course, but it came to my mind more powerfully today because I happened to see maybe 12 youngsters at church with bushy bushy hair. One kid's was very wavy, full, and even in his eyes. He had something of that Freddie Bartholomew charismatic look, you know, or perhaps a little more unruly, like Douglas Croft. Then my mind automatically pictured him at 30 or 40, balding, balding, bald, and I thought, "You poor innocent!" All he'll have is a slick head and a picture of himself as a kid. His kids, assuming he's able to find a woman, will look at it and laugh, "Dad, you had so much hair!" Of course he'll take it in stride, like every old man must, our daily cross.

Another kid's hair was just like Anthony Wager's, you know? with more than a hint of Johnny Sheffield, at least in the curl. I thought, "God, there but for the age of me, go I!" (Hope these references from the 1920s aren't too obscure.) And another's was very nice, straight like Jackie Coogan's, the young Jackie. What a head of hair! Beautiful, straight, but full, and we all know what happened to Jackie. Bald as a light bulb, with, in fact, a light bulb in his mouth! "Spare me a similar fate, O God, keep me under 40!" might be your prayer.

The ideal thing -- and I know I'd never get their undivided attention -- would be to talk to them. And share some wise advice. Marry young would be at the top of the list. Get her locked in, deny her an education if you must, anything to keep her when you hit 40. Although, thinking it over, maybe an education wouldn't be so terrible, just so you keep her entirely dependent in some other way. Say she's learned the piano and is brainwashed, thinking you're behind her talent. Because, believe me, 40 arrives before you know it. The speed of time literally doubles at 30.

These boys also might need advice on their career. You need an early start, even if it means baling on high school. If you have even a hint of giftedness -- or you can fake it -- present yourself as a prodigy and get a leg up on the competition. I know there's a million businesses out there that'd snap up a prodigy (or impersonator) in a heartbeat. Memorize a bunch of stuff, be pushy, be confident... and by the time 40 gets here and your hair's gone, you'll be locked in. With the right luck, you'll be president of the company and able to call your own shots.

One critical thing to avoid is this -- anxiety. Now, maybe everything I've said so far has made you anxious. Big mistake on your part. It is critical -- critical, I say! -- for you to remain calm. Quick, take a deep breath! Quicker! There's no time to lose! OK, exhale it slowly, slower! for crying out loud! Good God! Somewhat off to a bad start ... now, back up -- you've just speeded up the balding process. Advice: Take a nap and come back.

You can readily see, I hope, the psychology of balding is very tricky. Consider these statistics: If anyone even suggests to you that you will go bald, as I'm suggesting today, your likelihood of being bald early based on that alone is an extra 50%. Then, and this is no joke, the more you think about it, the more you worry about it, the percentage rises. It's been my experience -- and I'm bald -- that simply noticing other bald men helps you focus on the threat, to the point that you can think of nothing else, and you'll be bald at 25. Seriously, I know a guy just over 25 who couldn't think of anything else. Now he's bald and can't think of anything else.

Probably the best advice is to enjoy your hair while you can. Because it's going to happen. Just don't worry so much about it. Impossible, I know, but worth a try.
Posted by dbkundalini at 4:48 PM