Drink Yourself Into an Early Grave 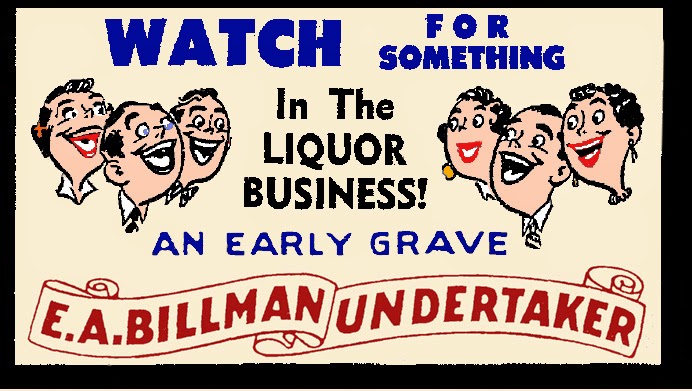 I'm still excited even this morning, after an interesting evening last night staking out a liquor store on the east side. I'm thinking this is how Carrie Nation got started... Certainly it's something that will benefit society, my work leading either to a renewed push toward Prohibition II or providing anthropologists of the future something of what went on in a time when liquor was permitted.

Of course I'm hoping for Prohibition, a more immediate payoff than future anthro. The way I look at it, We've fought the war on drugs for 50 years and made great strides. But we only gave Prohibition a measly 15 year try; why bail out so early? I'd say it's indisputable, if they'd only left it in place everything would've sorted itself out by now. Dillinger and Capone -- weren't they well known troublemakers? -- would've been dead by now and out of the way.

Now, though, we have to start from scratch. So, for the good of the cause, guess what, I took my trusty notebook and pen, and got as close to the liquor store as I dared. All I needed to do was settle in for the long haul, which was three hours. And, I might add, this was three hours of some of the most interesting work I've ever done. Keeping as good of notes as I could. I have a little arthritis in my hand, so that slowed me down. And there were more people going in and out of the liquor store than I could note; it was impossible for me to keep complete track, but every little bit helps.

Someone told me whenever you set out to do anything -- in this case, reinstitute Prohibition -- you need to make a case for it. That's what I'm working on, and this was just my first outing. Wish me luck!

Right away, I was continuously muttering under my breath, "Another one drinking himself into an early grave." Which means, as we all know from statistics, people die all the time, earlier than they would have had they survived till when their number's up, actuarially speaking. I think there's great benefits in trying to get people to live till then. If, to make the ultimate case, everyone lived to their actuarial potential, and there was an established history of that, life insurance rates would go way down. You'd get a million dollar policy for something like 40 cents a month.

OK, I settled in, and these are some of the customers I saw, described as best I can, with the apparent purchases they made. (In case you're curious, only one guy out of 100+ noticed me doing something suspicious. He walked by my car at a "safe distance," at which time I pulled up a prop paper sack and pretended like I was drinking.)

There were women. One of the first ones was a lady, maybe in her 40s, old enough to know better, who went in and came out quickly with a six pack of beer. She was one of the first ones of whom I said, "Go ahead, ma'am, drink yourself into an early grave." Also among the first ones was an older man, maybe close to 60, who walked like he had a cob up his butt (as my Grandpa used to say), with a big old beer gut, carrying out a little bag. Such a small bag for such a huge gut! And what a huge early grave he'll need...

After a while I thought of investing in a casket company. I definitely saw a lot of candidates for an early box. I've helped undertakers before. They put an official paper, rolled up in a glass tube, in a hidden hole in the end of a casket. This states the person's name, etc., and what they died of, which is supposed to last intact 5,000 years. For this guy, "He drank himself to death," will likely be the verdict.

Here's another dude, younger, 40-ish, probably with a wife and kids at home. I saw he got whatever he got well concealed in two paper bags, probably to sneak it past the family. Where exactly he hopes to drink it, I don't know. He looks like the kind of schmuck who'd have a "man cave," so that's probably where they'll find him. Go ahead, dude, drink yourself into an early grave.

Friends, think of your family if you won't think of anyone else. Most people don't pre-arrange, you know, and it will be absolutely awful for them to have to go through that agony on the fly, having just heard that you're going to an early grave. Myself, I'd definitely do everything I could to spare my family that agony. But then I wouldn't be mixed up in such a shady enterprise in the first place.

For some of these guys, it might be a positive if they did go to an early grave. It'd be a major red flag for the survivors, who would then live a much better life. But that's not my judgment, ultimately. This is interesting work, even though little ethical conundrums like that pop up. It's a messy world. I didn't come up with the world's problems; I'm just trying my best to make them not so problematic.

What's this? A young man in a white panel van, no windows, making a bee line for the liquor store. With no windows there's nothing to stop him from climbing back there and guzzling it down. It's in a brown paper sack, not a very good way to conceal it. We all know what it is. He's young, probably young enough to card. How tragic to have an overgrown kid headed for an early grave.

I've had a few plump men, out of shape, going in. And now here's another, a plump man, out of shape, likely to be drinking his sorrows away later. With more sorrows to come, no doubt, and earlier than he anticipates. Here's a plan, Einstein, how about getting in shape? Have a can of Ensure, check with your doctor about a water regimen, and exercise. You'll look better, you'll feel better, and you'll live to a ripe old age.

I saw a very interesting one. A guy with headphones went in and came out soon, buying nothing. Good boy! I said. But I made a notation: "Those headphones aren't good for your hearing. You'll be deaf before you're 50."

It's interesting that so many women go in unaccompanied. Things have definitely changed since my family was staking out liquor stores in the mid-'60s. Here's a little lady with a 24 pack of beer, a lot of beer -- a lot of beer! -- for such a small gal. I hope she drinks only one at a time, like one a month, or changes her mind completely. She must be extremely sad about something to need that much beer. Surely she knows, at least subliminally, that she's on her way to an early grave.

Here's a case that has more to it than meets the eye: Young couple, man and woman. They arrive and depart in two separate vehicles. I started humming the song, "Just walk on by, wait on the corner, I'll love you but we're strangers when we meet." With this I foresee two family tragedies in the making, the obvious hanky panky and the early graves they're headed for. Their purchase: A big clear bottle of something. Would that be vodka?

I saw a bald 40-year-old dude with one bottle. I put in my book, a little grim humor, "Gonna lose more than your hair. Early baldness, down that bottle, early grave." Just a couple others. There was a 35-year-old with a 12 pack. It makes me sorry to see people so desperate for a supposed good time, because I know they're playing with death, and sure to lose, with no rematch, no do-overs, just a one way ticket to an early grave. One other: A big guy had two packages, a 6 pack of bottled beer in one hand and another bag, concealed, of some wider girth. Maybe a case of something. That's a lot to carry out, anticipating that future moment when they carry his girth out, which will be very, very early.

If you like the work I'm doing -- and this is just part of the evidence -- I could use a word of encouragement, even if it's something very common like, "Keep up the good work" or "Keep up the fight, we appreciate you more than you know." Of course financial support is always appreciated. For a few healthy snacks while I sit out there.
Posted by dbkundalini at 8:30 AM