Drive for Pride -- Self Image 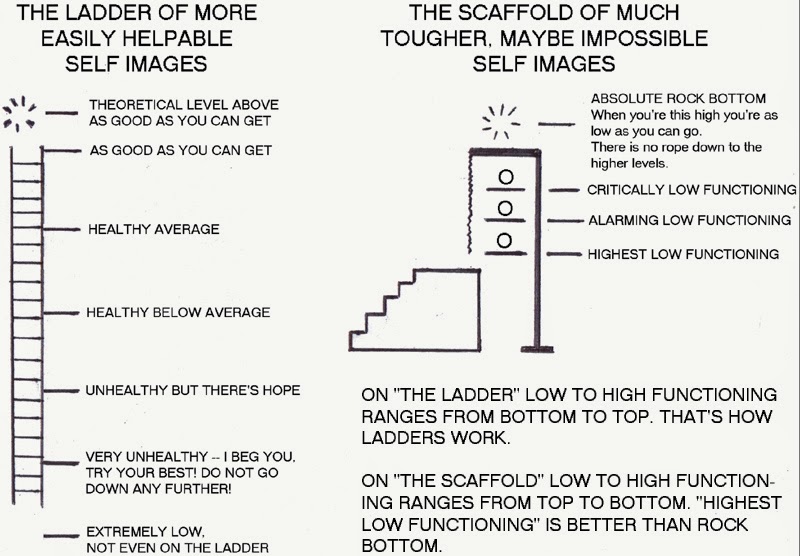 There it is, the chart I made in the '80s for a college psych class, on the subject of Self Images. Reading through it, it still jibes with my current thinking. I don't know if others have made progress since then. If so, good for them. I'm personally happy I got it right the first time, and to see how mightily it's stood the test of time.

This is the chart I was referring to yesterday in my post "The Forlorn Duck.". Now you can visualize where I said I was on the Ladder side, at "Healthy Below Average." That's where I started, being in a funk, the funk dinging my self image. Then I more or less changed my mind on a dime and was able to stomp -- physically and mentally -- my way up a few rungs to "Healthy Average." Pretty good, huh? Still, that's a little low for me, not bragging, because I generally run midway between "Healthy Average" and "As Good As You Can Get."

I'm happy to say that I've never fallen completely off the Ladder in my life. I can understand people who have, though. Because there's been those rare occasions when I've glimpsed the Scaffold from afar, which scared me straight back up the Ladder. True statement. I've always been someone deriving tremendous benefits from fear of every kind. I've avoided so many life-crushing setbacks in my life, thanks to fear. And now the pattern's so set that even if I lost my mind completely, I'd probably still have enough fear in me -- deep-seated, in a groove -- that I'd be safe and free. No incarceration or confinement for me!

OK, let's take a look at the Scaffold side of things. You start seeing the Scaffold side when you're at the bottom of the Ladder. There's a signpost near the Ladder's bottom that reads, "Very Unhealthy -- I beg you, try your best! Do not go down any further." Wow, that brings back a lot of memories I'd just as soon forget! Because I am personally the guy who posted that warning. True. I was right there, with the Scaffold side in view, with two ways to go, down further then across to doom or back up!

You can guess which I chose. And this is how I did it, like it went in "The Forlorn Duck," and similar to clapping and believing in Peter Pan/Tinkerbell, I simply rallied and stomped my way back up one single rung. Putting me in the "Hope" region but still so low as to almost have No Hope. I took off my mental belt and strapped myself to the side of the Ladder, gasping and shaking with something like delirium tremens, until I settled down. Then I carefully unhooked the belt and clawed very carefully up most of one rung, at which point I rebelted and rested another hour. After that I gave it my all and finished the rung. Finally, I was safe enough to sleep in place and progressively make my way back up over the next few days. Four days later I was home in time for breakfast.

Anyway, back to the Scaffold side, for those brave enough to take a look... When you go up a scaffold, you're going to your doom. That's why the worst self image states are toward the top, leading to some curious descriptors: When you make it to the top you've hit rock bottom. But when you go down, you're mentally ascending. The truth being, In this realm, nothing is what it seems. Let me clarify that by saying, In this realm, there is such a lack of possibility and hope that all of it is more or less diffuse; there are differences, of course, between the high bottom and the low rock bottom top, but when things are 100% hopeless, to you those distinctions lack meaning. Obviously, though, we still use them clinically for quantifying a person's self image or lack thereof.

I've probably known a person or two who've been at Absolute Rock Bottom (ARB). But, as you can guess, they tend to be people you turn from almost immediately, lest they suck you in. Still, it would have to be an interesting state, except to them they seem unaware of their state and certainly unable to describe it. There's such lifelessness, it's scary. Most professional helpers I've known who've had a likely ARB case generally stick them in a freezer till a cure is discovered. Then 100% of those soon suffer freezer burn, and, worse, die.

The only sure cure is to avoid the Scaffold all together. If you can't manage that, then, whether it's your own fault or someone else's, you really should have tried harder to manage it. Seeing, though, a case in which you didn't, there's no reason to talk of cures now. Maybe something like going to a castle, being laid out on a lift gurney, and being raised out a domed tower, and being repeatedly struck by lightning -- and having had someone qualified to prepare the wires and apparatus in particular ways -- might do the trick. But that's a lot to depend on, especially since most insurance plans don't cover it, and, anyway, the odds of success are worse than winning the lottery without playing.

In your own personal "Drive for Pride," you need to tend often to your self image. It's easier to regress, naturally, like a coach potato, but it's much more satisfying to make progress, and, having made progress, to maintain your good position in life.
Posted by dbkundalini at 8:26 AM