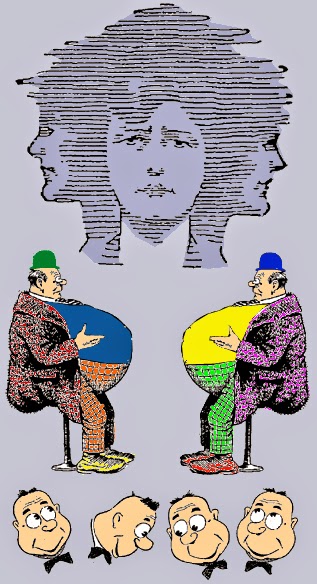 How about you? Ever get a terrible feeling of malaise coming on -- a vague sort of inner discord, seemingly from no where -- that if left to itself becomes funk, then progressively escalates into a big enough depression that you're in the hospital?

Honestly, no, this has never happened to me. I've had the malaise and the funk, of course. But somehow -- maybe just lucky -- I've avoided the depths of it that some people experience. I'd like to think I have at least a small degree of knowledge, something within, that puts me on the upward path.

I guess it's always a positive to "know yourself," whether it's what color your parachute is, what your rainbow color is, which animal you are, which Beatle, which Stooge, which pizza topping, etc. By the way, I think a good one would be "Which movie streaming service are you?" If you're Hulu Plus, you're more tolerant of suffering than Netflix, because of Hulu's many commercials. If Amazon, you're more prone to temptation, because of all the movies you can't watch without paying more.

When it comes to malaise/depression -- Queasiness -- you might ask yourself, "Am I Queasledee or Queasledum?" I'm presenting the two, Dee on the left and Dum on the right. Just looking at them and thinking intuitively, I like Dee's colors more. Dum's bright yellow shirt gives me the feeling of malaise simply dragging on. Whereas Dee's rich blue is much more integral to me, giving the stimulation I'd need to get over it. On the other hand, Dum's shoes are red, recalling something earthy, like clay, something grounded. But, again, there's yellow, Dee's shoes, a nasty color for shoes, unless they're just tennis shoes for fun. So what would that make me right now, going only by that, 90% Queasledee and 10% Queasledum.

Notice, the heads are the same. These two could be mirror images of each other, both seated on a terribly burdened stool. It's not somewhere I'd like to sit, not for long, not with my obvious weight truly bearing down. This tells us something important, though, that the things we depend on in challenging times can actually be quite small in relation to our much larger problem. How many people I've heard of who've gotten better, transcending the enormity of their problems, not by knowing whether they were Queasledee or Queasledum, but by taking whatever small pill their doctors prescribed. That might be the true answer.

Be that as it may, we sometimes find malaise returning, and I personally don't want to bother my doctor too many times. For that, I've added the four "Dorkheads" under Dee and Dum. This gives the whole scheme added variables that come in handy for complicating things. Simply having Dee and Dum there as binary opposites -- or perhaps as close, though not identical types -- doesn't get us very far. But adding the Dorkheads, each Dorkhead can go with each of the main bodies. One, two, three, or four, see?

Here's how I see it. You come to the determination, say, that your malaise is best described by Queasledee. Now, which of the Dorkheads would you use, if any, to supplement your findings? I've had quite a number of down times when I wouldn't have added any Dorkheads. I would've said, "I'm Queasledum right down the line," or Queasledee. Then other times, I'm definitely not satisfied till a Dorkhead is added. I'm a big fan of the one looking most downward with a strong kick from one of the upward looking ones. That tells me an important lesson, that it's up to me to choose, and the rest of it's likely irrelevant.

Whatever you do with this tool, of course that's up to you. I offer no guarantees, and this is for entertainment purposes only. I'm just putting the information out there, like they do on commercials. "Professional driver on closed course. Do not attempt this," as the driver drives along like any of us would do. If you're happy, stay happy. If you're upset, take your business elsewhere.