My Wife the Orangutan 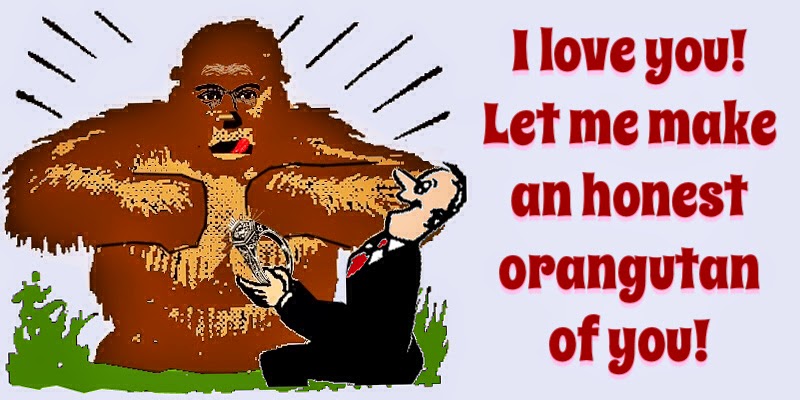 It was a dream come true. So many times I'd dreamed of having that one true love. Which then always eluded me. You know how dreams are, this becomes that; it's all inexplicable, and forms don't persist, and the normally imaginable is replaced by the utterly fantastic.

That happened one morning, in the last dream of the night, that I was in love with a huge orangutan. She and I were sharing a deep moment of eye contact. I hesitate to share my thoughts at that moment, but thank goodness I woke up or we might have prematurely erased the boundaries of propriety, absent marital vows. Crossing this boundary with an orangutan would be put me in a Huff Post story, destroying my life and opening me to the threats of bullies, and then stories about that.

The thought, though, wouldn't go away. Her size, the muscles, the tenderness of her fur, the depths of the eyes, even the quirkiness of her smeared-on lipstick. It's that desire for mature relations where there's still a hint of innocence that does something to you. It's true for the saint and the sinner, the witchdoctor as well as the man of medicine. They see it everyday and they're not turned on -- nothing they'll confess to, anyway, but flutter those eyes in a motel room, and pucker those tentative, quivering lips, and Katy, bar the door! Cigarette time.

I hustled myself to the orangutan exhibit, where our eyes met again and again. Must've been 800 times. The zookeepers noticed me after 100. I was monitored by the other orangutans every time after 300. I was exhausted around 500 and beat up by the aviary. Some time between 798 and 800 -- I guess it was 799 -- we fell in love.

It was only a matter of her downing a case of energy drink, washed down by a single pot of whole bean coffee, and a touch of Tabasco on the tongue, before she broke loose. We fled immediately to an ordained friend, an extremely traditional hidebound guy, outspoken in his opposition to any deviation from societal norms. So strict is he there's no plumbing the depths of it. He readily married us, me in my normal clothes, she nude except for a lampshade on her head as a veil. We said, "I do," and I carefully lifted the shade and beheld my bride.

We were understandably nervous about what would come next. I hesitate to write about something so tender. But we drove by the motel, must've been 800 times. Some kids sneaking in the pool noticed us after 100. A guy looking for handouts stood up every time we went by after 300. I stopped to check a tire around 500 and was beat up by a gang. Some time between 798 and 800 -- I guess it was 799 -- we checked in.

Then it was off to our room, which we went to directly the first time. I will let it fade to black, leaving aside the close to 800 times we consummated the marriage, and the other way stations it took us to get there -- the 100, 300, 500, 798 and 799. We didn't have time for all that, working as we did through the entire King Konga Sutra. Had I known orangutans were so tireless and persistently demanding -- Downtown's an entire city itself -- I might have found someone else, a goldfish or even a woman.

But the deed was done, and the marriage was real.

The story doesn't end there. I'm writing this account on the eve of our 85th anniversary. Yes, it's now the year 2099, and, yes, the zoo still drives by occasionally, looking for her. No one told me orangutans lived so extremely long. Or me, for that matter.
Posted by dbkundalini at 6:19 AM