Run Away and Join the Circus 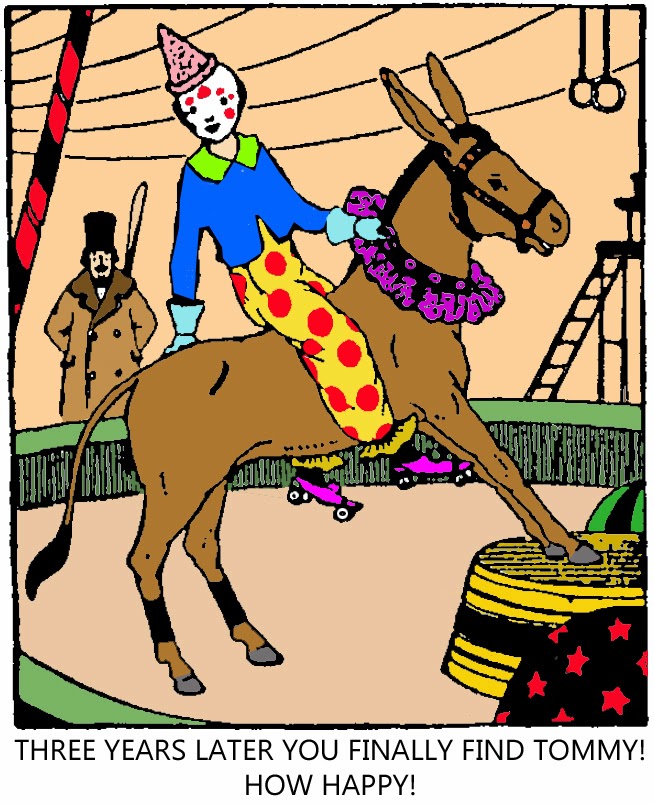 I seriously hope there's kids out there who still want to run away and join the circus. I bet there are. What a fantastic life that'd be! I think it'd be great. For a lot of us, though, we don't really see that many circuses anymore. So the temptation isn't quite as strong, plus I'm getting very old. But in the small towns I just know there's still have to be little circuses coming through. Allowing kids the opportunity. A little fly-by-night operation would be perfect for a kid to run away to; start small and work your way up. I'd do it in a heartbeat, given another chance.

Of course it's something I always wanted to do, but, dammit, never did. I should've gone for it. I was always so concerned about the feelings of my parents and grandparents -- who loved me so much and were so good to me, just my bad luck. Had they been like other kids' families -- scoundrels, turds, and cranks -- I would've been gone in a heartbeat. Whether the circus would've wanted me, that'd be their problem. They would've thought of something for me to do, keep the clowns happy or something.

It could be that circuses back then, when I was a kid, had so many runaway kids, they just farmed them out to all the countries circus performers seemed to come from -- Mexico, South American countries, and Romania -- where they were trained. That actually wouldn't have been so bad. You're in South America, you learn from the masters, then you're part of bigger circuses. 10 years later your parents are in the audience and there you go trotting by, standing and jumping rope on the back of a plumed horse.

One of my favorite books -- and I can't seem to find it -- was always "Toby Tyler," which, unfortunately for him, when he runs away and joins the circus, it's a terrible experience. They treat him like crap. On the other hand, that wouldn't be so bad. You prove yourself, you work your way up, you dispose of your enemies. I can't remember all the details, except, Toby, Why limit yourself to that circus? Run away again and again till you find a more kid-friendly one.

I was thinking, maybe someone could come up with a program -- put together by parents and circuses, to allow their kids to "run away" -- or just to be driven in the car -- to a circus, serving an apprenticeship, etc., to see if they like it and would excel. I get the feeling that circuses are in some danger of slipping away. So what better to revive struggling circuses with but cheap labor, with kids not even really in it for the money? Then, assuming that a bunch of them would never want to go back to their families -- it'd be tough to go back to parents who abandoned you to a circus -- they'd have all kinds of experience, and would be able to make that circus flourish and found others.

The program I have in mind I'm tentatively calling "Toby's Big Secret," because it at least recalls the secrecy of running away to join the circus. A bunch of "Tobies," then, have that experience. They're with the circus for X number of days, months, or years. It's good for everyone, a win-win for the circus, as well as the parents. If the child never comes back, at least they're earning their keep and learning life lessons. I think it would've been fun if "Toby's Big Secret" was a program when I was a kid. Instead, I got to go to camp for one stinking weekend, that's it.

"Toby's Big Secret" could also be used in conjunction with children's "Last Wish" organizations. Let's say I'm a dying child -- and let's be realistic, that's what we're talking about -- I would be the best clown in the world! Seriously. The best clowns are those that evoke pathos, the crying clown, the big sagging sad eyes and bowed head. Even to the point of carrying a dead flower in a pot. If you're a child in the death throes, no one would make a better clown. With the diminutive size, you'd have the place in tears. I'm honestly choking up, thinking of myself like that. With the audience reaching out to me, crying like babies, and somehow curing me. Now I'm cured, let's say, I milk the act forever, since they're also throwing money.

The biggest danger in joining it with "Last Wish" activities is that they might give you more dangerous things to do, knowing your time is already short. Which, I guess -- and I say this reluctantly -- if I can't be a clown and have the audience loving me, would still be a great way to go. Helping steady the elephant's feet so it doesn't step on the beauty queen. That doesn't mean it won't step on you. But what a way to go! How would you rather die? In a hospital, going bald, down to skin and bone, your healthier siblings standing there crying, the parson hat-in-hand droning trite prayers, and your parents stuck organizing pancake benefits? Or with five tons of raging elephant coming down on you, then hoisting you suddenly on its trunk and flinging you through the air, impaling you on one of those giant tent poles? Give me the circus!
Posted by dbkundalini at 6:25 PM