Join Me for Paranoia Week 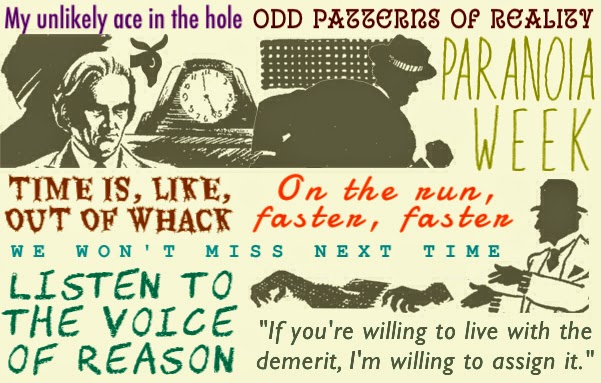 I'm inviting you to join me here for "Paranoia Week," June 2 through June 8. I know you'll like it, if you like the thought of a guy on the wrong side of "forces" that may or may not exist. Even now, I'm feeling jittery thinking of it. Saying, as I just did, the forces may not exist means only one thing, I'm a goner. I'm nervous about the descent, let alone the myriad terrors I know are there.

Speaking of the descent, that's what I'll be doing tomorrow, so I won't be here June 1. I'll be going down into a full-bore paranoid fit, which takes a lot of stewing, mixing it just right, and letting it work. Only one day, you say? Yes. Like you, I've heard of many other "Paranoia Week" bloggers who've stewed for an entire year or more. They go the last mile -- sweat lodges, hot compresses, new age music, reverse yoga, etc. -- and what they come up with is quality. But I don't personally have that much time to waste, and, again, with just a day, I guarantee results.

Like I said, I'm getting jittery just thinking about it. There's a lot of annoyances on the way down, the inner sounds (and pain) of things snapping and sparking, almost like we're some kind of machine. Next, there's a vast silence, as aspects of the Self are being disconnected, in particular your thoughts talking you out of it. Then a comforting grayness, stretches of grayness. You can be quickly lulled into a dangerous complacency here. You need to keep an eye on the edges, looking toward your ears, to not slip off the edges, like on a slick highway. At the edges are chthonic aspects of the personality that, given a chance, would bite your head off.

I'm recalling the last time I passed that way. How well I remember these heavy mildewed curtains from old vaudeville stage shows. Past lives that think they're here and now. Queer performers line the hallways, stagehands fluff sandbags, electricians man quaint old light fixtures. A lot of the snapping, the electrical phenomena, is from them. The performers look extremely dangerous. Their fingernails are extremely long, and their throats are stretched beyond normal, as they try to keep in voice, expecting any moment to go on stage. They don't know it's been close to a century. If they actually sung it'd come out screeching.

There's another place along the way, a place to mention. It's a place of utter bleakness, darkness. But tied to a post there is a donkey I call Desi. He's a cool donkey, the nicest creature you meet in the land of paranoia. The rest -- I can't get into the rest -- the Hall of Unwashed Broken Mirrors, the Pavilion of Things Found in Sofas Personified, the Cavalcade of Good Monks Gone Bad, whatever. It's all evil. The only good I've run into is Desi the Donkey and the spirit of St. Rita of Cascia, the saint with the big scar on her forehead. This wonderful Bride of Christ reaches out to me, and I realize her precious message, treasuring it in my heart: Paranoia is good for your pores.

Oh, no, I'm having second thoughts! I shouldn't do this! I know I'm going to look like hell when this is over, good pores or not, and much of that remains forever. I'm 61 and look 80, thanks to this. Now, if I live, I'll come out looking like a maniac, and older. I'll have someone else's heavy clothes on, some monk I'll spoil. I might have those horrible looking woolen half-gloves, with my fingers sticking out. When they see me -- people -- they'll see a maniac, and even though I'll cry out, hoarsely, "This isn't really me!  This isn't me!" no one will listen. Who would listen to a battered, torn, worn-out, and haggard, dragged out, dragged down, buffeted, beaten, and bruised maniac?