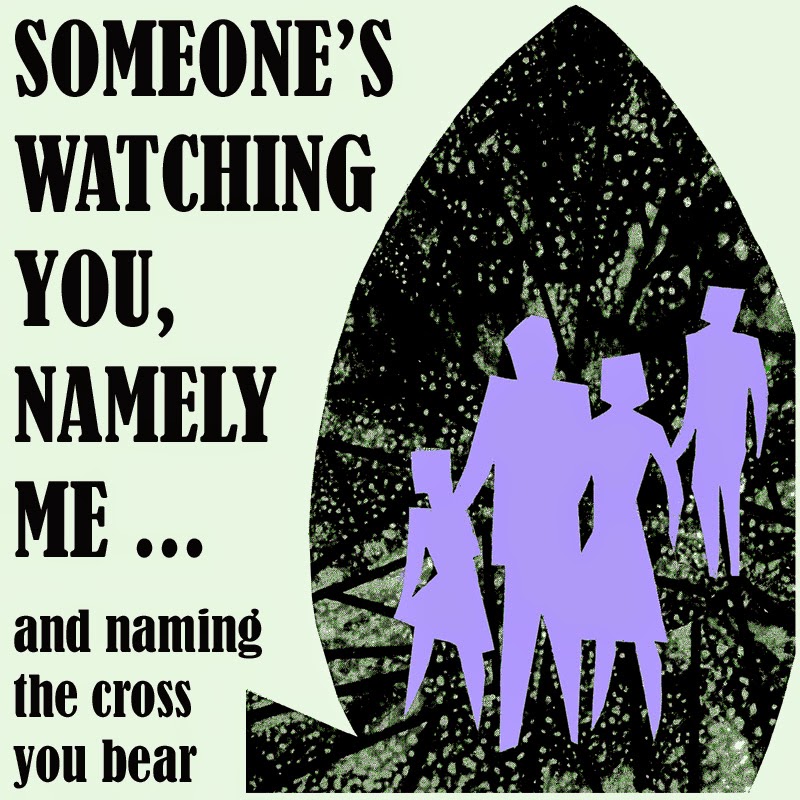 I was out on the prowl again today, "people-watching." They say it's in my blood, from the source of my blood, my family. I remember they mentioned it at my dad's funeral, that he liked it. I should have watched him closer, because I don't remember that.

The task I set for myself today was a deeper one than just summarizing activities. I was looking for something more "inner." I did all this very much on the sly, taking glance or two and trying to discern as much as I could. Note: If I discern a lot of personal information, like passwords, bank accounts, various trysts they're headed for, etc., I immediately forget it all. Let me repeat, no one's most confidential information was recorded.

VERY PRETTY GIRL, 18* -- Of course she has a huge cross to bear, being indisputably lovely. Good colors, too, of the clothes. She knows how to dress for maximum appeal. But her loveliness is her cross, because she knows so many who see her want her, and so many for all the wrong (superficial) reasons. I can read the minds of other guys. Both guys who have a hard time with women and those who don't. I hate the thought of some of these bastards taking her out. Thinking, 'She's on my arm, how nice for me," so selfish. The other dimension of her cross is others' envy.

YOUNG WOMAN IN COMPLICATED WHEELCHAIR, 24 -- These are tough situations. She can barely move, going in slow motion, very vulnerable, but she's out, not staying home. A lot of crosses she must bear, I can't even get to them all. She's looking to see pity, which she hates, notices the staring, people wondering what's wrong, etc. I would guess you'd have to put most of that out of your mind after a while. Life is too short for all that. But still, obviously people are wondering, even though we've all seen every extreme in life. Such moments make me wistful in philosophical musing, the crosses people bear. I'd guess she has many acquaintances who are helpers. I hope in her many struggles she's gained strength.

ME, 61 -- I'm ambivalent about what my life's meant. My so-called accomplishments, comparing them stacked up next to my regrets. Big regrets. Aging speeds up as you go, for me most recently felt in all kinds of frightening pain and changes in my knees. I believe I can honestly say, No one's suffered like me. Another cross is my worry that I look suspicious to others, like a dangerous old codger, say, to the pretty girl, 18, although in truth I'd be the best friend she ever had if some lech came swooping in. I'd go into a karate stance, and kick him firmly in the--

MAN, ABOUT 30, FIT, STEADILY EMPLOYED -- I'll call him Joe Above Average. Stickler for rules, takes a lot for him to cut loose. This cuts both ways. It keeps him steadily employed in a moderately responsible public position. But he wonders if this is all, everything he was actually cut out to do. Still, his nature isn't primarily to question but to continue in the same channel till something shifts on its own. His cross, then, is just moving over the border into malaise, to soon return to normal. Must be a queasy feeling, since he normally avoids such things. (I've had personal dealings with this guy, so I know he's a stickler for rules, even when pointless.)

LITTLE GIRL, 4 -- Cute blonde in light, loose dress, a dress tie in her mouth. Everything's reasonably new for her. I see her holding Daddy's hand. Every day's a decent-enough day. Her cross has to do with vague security issues, possibly fear of the dark. She's seen glimpses of scary movies; in this age of Netflix, it's hard to miss. But Daddy and Mommy are close enough, and there's a nightlight in every socket, so it's a still a very tiny cross.

SCRUFFY MAN, 32 -- Wearing one of those strapped undershirts as his main shirt -- my brother and I called them "goony dresses" when we were kids -- and it's tight. Also has a camouflage hat, scruffy hair, more than a tad overweight. This guy's not too worried; he knows where his next beer's coming from. He's got a decent enough hold on life and is obviously comfortable, going by a fairly slovenly look in public. His cross is a persistent nasty smoker's cough and mortality. This, however, is not directly a concern, but he worries which boy ought to get his half-restored mid-70s classic pickup. Other than that, "I'll just smoke and hack away, then die, no biggie." Let me modify his cross, half-cough, half-pickup.

LIMPING MAN, 45 -- He's lived a good life -- having an efficient nature, focused on a particular specialty. It might be air conditioning work, or some other repair job. His thinness is such he could really squeeze in there and work on things with the best of them. But there's this terrible limp, after a compressor (guessing) fell on his foot, and he's going gray. His cross is the fear of change, needing to keep up on developments in the appliance biz. He hopes things will still need fixed, since a lot of people just throw things away after a few years and buy new.

OLDER WOMAN, 72, CANE -- She has an advantage in that she doesn't need the cane all the time. As a cane, it's more or less a crutch, not literally. She's living a decent life in her retirement, likely a widow, but happy enough, reading, working an occasional crossword, watching basic cable, and working on a few safe hobbies. Sewing activities. She's well-liked by the other ladies at her church, although I'm sure the ones who are extremely cane-dependent resent certain things about her. She's traditional, but easy-going. Her cross has to do with future concerns, obviously involving the cane, but more than that, mortality. She knows the abyss is in the picture. More than the abyss, though, she fears she might become a burden to others. I should ask her ... nah! I'm sure I'm right.

* Ages estimated, but I'm sure I got the genders right.
Posted by dbkundalini at 5:30 PM