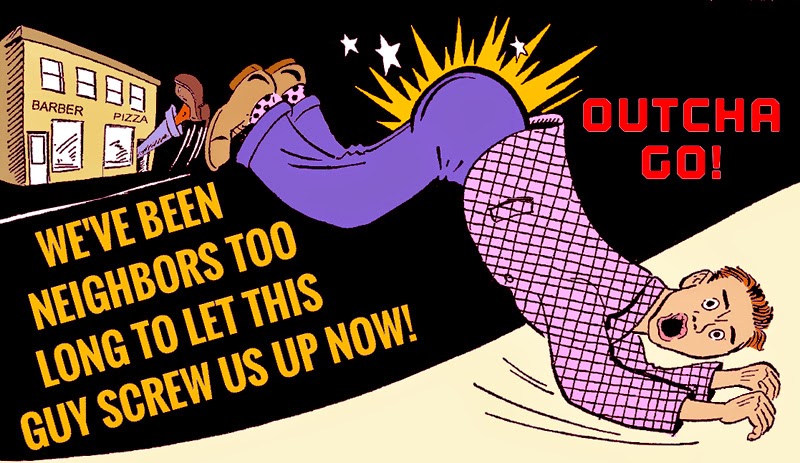 I saw the basics of this incident with my own two eyes. But I didn't really know it was in process till I'd noticed the guy walk by three times. I was sitting on a bench uptown. By the third time the guy walked by me I looked up from my phone and started paying attention. Then I was able to piece together the previous three trips in the context of the incident.*

The guy is a guy about town, someone that if you live here you see all the time. He doesn't seem to have a ton of friends -- never a companion -- but everyone, especially businessmen, know him. He's uptown a lot, and must check in a lot with merchants. This time he was going back and forth between the pizza place and the barber shop.

By now, with yet another trip, the pizza place thought maybe there was a problem. He explained that the barber was certain the pizza was supposed to have been $7, but it turned out to be $8. The extra trips back were the barber's way of recouping his dollar.

So the pizza man sent him back to the barber with a message, that the pizza was indeed $8, not $7, because extra cheese is a dollar more. The barber sent him back with a message that he hadn't asked for extra cheese, the usual amount of cheese being all he wanted. The pizza man sent back a message that naturally he wouldn't have known that. He put one little knife in the barber's back: People rarely go to the barber, and then it's always the same ones. If the barber remembers what his customers want, that's no surprise. But so many people go the pizza place, many different ones, one order's the same as any other.

Obviously this kind of nasty comment didn't sit well with the barber. Especially since their commerce is only one way, the barber ordering pizzas but the pizza guy never getting a haircut. (I'm sure I would've have a hard time holding my tongue, too.) He sent the guy back to the pizza place with a message: "Your pizza sucks anyway, whether it's $7 or $8." The pizza guy sent him back with a message in return: "Why do you think I never come in for a haircut? The looks of your haircuts aren't the greatest." Their go-between man was Exhibit A, whose head and whole manner look totally bad; he's just a guy with bad hair.

It escalated from there. The barber complained that the pizzas were often dry like cardboard, and in addition, the occasional sandwiches he'd ordered were tasteless and skimpy on meat and hefty on lettuce. The pizza guy sent a message back that haircuts in general are very boring, and that this particular barber's haircuts were the most boring. Plus, and here he was unfair, the barber's toilet paper budget must be through the roof, just to patch up nicks from shoddy shaving practices.

By now the guy had gone back and forth -- I lost track -- maybe 18-20 times. As an emissary delivering messages, he did a fine job. But in my opinion it would've be more helpful to smooth out some of the rough edges of the messages they entrusted to him.

Finally, the pizza guy thought, "The barber actually is a pretty good customer. And we've been here all these years, on friendly terms." The barber, to his credit, also thought it over, "If I don't fix this, I won't be able to order pizzas again, which means I'll either starve or have to order from someone farther away."

The barber sent the guy back to the pizza guy with a friendly word, then to smile and ask about the extra cheese thing. But before asking about the cheese, the guy admitted ordering extra cheese, not to cause trouble, but that's the way he personally orders pizza, so it had slipped his mind, causing the extra dollar charge for the barber.

Of course there's a happy ending, as seen in the picture. The pizza guy kicked the guy out once and for all, then made up with the barber, returning his dollar, who immediately went to the register and gave the pizza guy 50 cents. They both agreed that they had been good neighbors far too long to let this guy screw them up now.