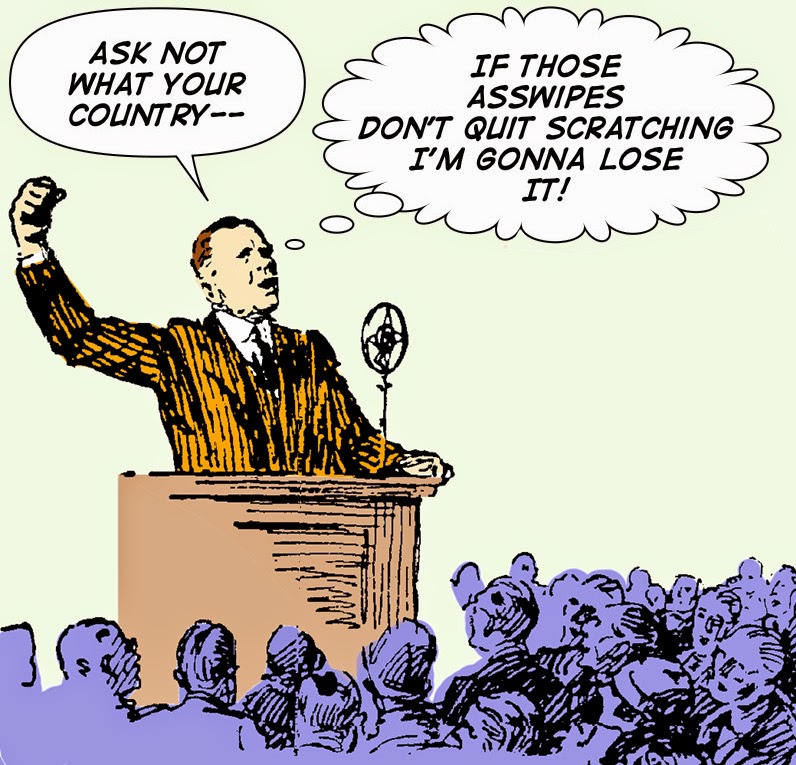 I've been so into my theories of itches not scratched being alt consciousness portals, I haven't been thinking of anything else. But the most prevalent alt consciousness portal I seem to have opened is the one of being constantly distracted. The more psychically interesting ones have yielded precious little true gains. I saw a devil in a fleeting vision that merely taunted me, "You know you want to scratch! Submit to me and I will give you relief!" To which I yielded, no not for a second!

And so I turned back to the soothing balm of my group dynamics studies -- always thinking of how groups interact (my real life field) -- so, today, something on guerrilla group dynamics along with scratching, which I so long to do, and how itching is so distracting, and relating that to political action.

Disrupting meetings, services, and speeches has been done to death; we've all seen it. But typically it's all so crass, with only short-term benefits, if that's what you want to call it. For example, if you simply stand up and blurt out a counter opinion, there's no way it's going to do any good. You're going to be dragged kicking and screaming from the arena, and possibly tazed, and the crowd's going to be chanting "USA," and once you're gone he'll make funny remarks about you, so there you are.

It's always been my opinion that the key to a good disruption has to be done much more subtly -- like guerrilla group dynamics -- in such a way that those around you aren't even aware it's happening. And by more than one person, working as a team but apparently not even together. What you're trying to do is more distracting than disrupting, because the possibility of an embarrassing gaffe is worth its weight in gold. Remember Rick Perry's missing third point? I'll tell you exactly what I know about that: I know nothing! My lips are sealed! There's not a thing to tell!

All right, let's say we have a team of 7. They're in the audience, in the 3rd to 10th rows or so, and scattered here or there. They're not looking at each other, except for occasional glances. They have memorized a "set song," held in common, and trained themselves, practicing earlier, as to when "scratch points" will happen. As an example, you might recall the old song "What a Party" by Fats Domino. It's on YouTube or Spotify. Three times in the course of the song the background singers sing,

See where we're going with this? They have the regularity of music, and the predictability of music, but it's not noticeable to those around you because there's alternate sharing among the 7. You're mentally keeping time in your head, hitting the "scratch points" with occasional glances helping you stay on track. These points are shared by the 7. (Nothing needs to be exact.)

Speakers of course are looking to the audience in a random, more or less disinterested way. But they do notice what's going on, either consciously or unconsciously. Most male speakers consciously notice every pretty girl.* But they only notice the more extraneous phenomena -- someone coughing, rubbing his eyes, yawning, or scratching -- unconsciously. Unless there's something a little weird, and undefinable about it, nothing he can nail down. These audience members, they don't look like they're out to get me. In fact they look interested. If they were out to get me, they'd erupt like always, and everyone would drown them out with "USA!" That old bit.

So there they are, our 7, inwardly (and by occasional glances) working with Fats Domino, with an undistinguished scratching of the temple, the ear, the forehead, etc. With an increasing awareness on the part of the speaker that something's just not right ... but what? He glances at the pretty girls, still looking great. Then a guy with an itchy nose. I can see him breaking into a sweat at any point, but if he says anything about it, the papers will declare, "What a paranoid ass!" So what's he going to do, call out an anonymous audience member? Hardly. You're not doing anything with eye contact. He has no reason to be suspicious.

I know I'd hate to be the guy. This is something that'd give me vertigo. Expect that gaffe any second! This is something that also could reap great benefits in other arenas. Such as concerts, you might be able to finagle 18 or 20 encores out of them. The band's fingers are bleeding, the drummers arms are falling off, they're a mess! But you had a great time!

-------------------
*If you had, let's say, 3 pretty girls of the team scattered around, whose job it is to just sit pretty, that'd be great too. You can imagine the dissonance. He's noticing them every time he looks out, a positive. Then he's less consciously noticing the others scratching. The "pleasure vs pain" thing going on in his mind would be an interesting dynamic, perhaps so interesting as to be campaign-ending. By the way, I said "male speakers" notice pretty girls. This would also true for lots of female speakers, somewhere between 2% and 10% by nature, and the others for multiple reasons.

Note: It probably goes without saying, but you don't tell others what you're doing. The key thing is, You're like the 3 Musketeers, whose #1 rule was "Mum's the word on this whole Musketeer thing."

2nd Note: This is "For Entertainment Purposes Only." I don't actually advocate doing anything like this. Heavens forfend! Unless one of the pretty girls sits on my lap.
Posted by dbkundalini at 6:12 AM