As the Blast Furnace Goes, So Goes Prohibition 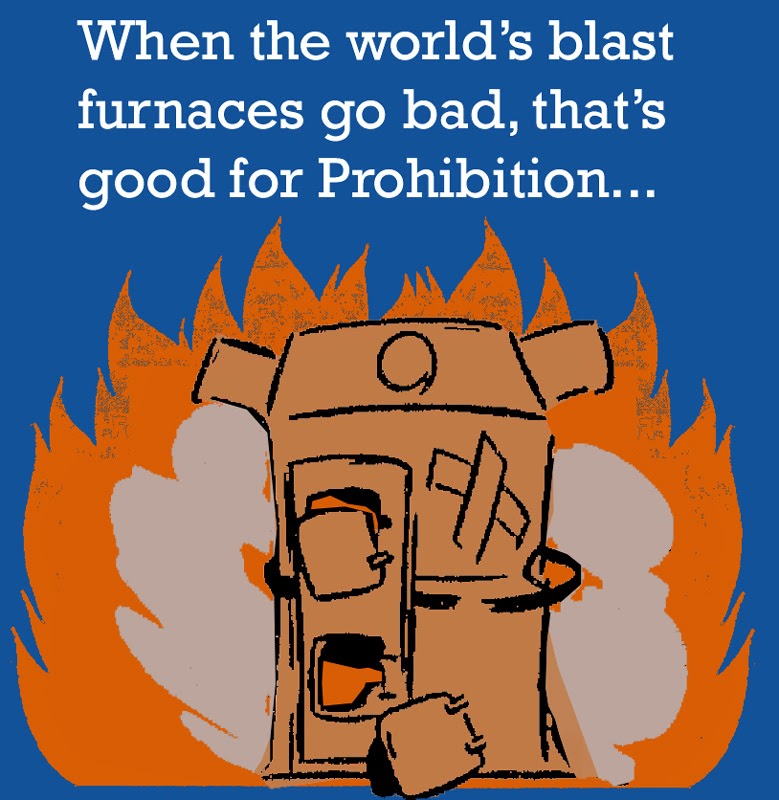 I'm sitting here sketching out ideas, trying to flesh out our "Push for Prohibition." I've personally been very disturbed by the number of people I've seen going into liquor stores, then back out. They usually have a paper sack, and I'd guess something overly-potent inside, likely of the bottled variety.

I know what you're saying: Prohibition was done to death! True, we gave it a whole 15 years try, big whoop... But the War on Drugs has raged on for over 50. And don't give me that lame Dillinger argument; he's been dead for close to a hundred years. This time I think people would actually welcome Prohibition. Get the booze out of their way, remove temptation, they wouldn't miss it. We're so health conscious today, we wouldn't miss it past the first weekend. Forget Dillinger, probably the biggest opponent today would be the powerful paper bag industry!

I can see the paper bag industry in my mind's eye. They struck out on the grocery store front, with the dominance of plastic. Plastic's got it over paper big time. It has the handles to hold, you can carry more at a time, and it doesn't make that terrible clunky paper noise. Then there's the lunch boxes that took over the lunch sack. They're more durable and interesting. So all they've got left is liquor. Sacks, an entire industry held in place by winos who can't change their own underpants. Disgusting. If we get the push going for Prohibition, I think we can easily demonize the sack industry. Call them "Strange Bedfellows Together in the Sack" on a few shady TV ads and that'll be it.

OK, getting Prohibition in place still won't be that easy. You have to go the whole route of amending the Constitution. One idea might be called the "Fight Fire with Fire" strategy. We get Congress drunk, they pass the bill, then when they sober up, we go, "See, you shouldn't have been drinking. Exhibit A!" Then we schedule the votes in the states during Oktoberfest; with the beer steins a'sloshin' and the thick-pigtailed, knob-nippled German girls very exciting when tipsy, we'll have the votes.

But just to be on the safe side, I'm looking at doing this thing stealthily. I don't want it to be the usual agitation, where one side -- the Democrats or the Republicans -- dig in because the other's for it. I want to pass Prohibition like a thief in the night, where the only ones actually paying attention are those in the paper sack industry. And like I said, they'll be hogtied with negative ads.

I'm hoping to do it like SETI looks for extraterrestrial life, with lots of computer nerds in their local communities looking for patterns, intelligence, and evidence, then adding it to an overall conglomerate, micro to macro. It'll be like a tsunami, one no one sees coming. And who knows, once we all sober up, maybe we'll be alert enough to find extraterrestrial life. And let's say they're drinkers, we'll ambush them, steal their technology, dissect them, and once again establish ourselves as the undisputed lords of creation.

I'm going to need someone to identify all the groups that do business at liquor stores and what their transactions are. I'm thinking it'd come out like archetypes: 1) Male, 2) Female, 3) Other designations descriptive of gender choice, 4) Young adults, 5) Medium adults, etc., then the different ways they crave, how they decide to go to the liquor store, what to buy, where to drink it, etc. This intelligence will be key in knowing precisely how to target our ads. In a particular demographic, my age, for example, we'll play the old records of Foster Brooks, now quite politically incorrect. He used to be funny, now he's not. That'll bring many to our side. And so forth.

I really like the more psychological archetypes above, i.e., on craving and various decisions. Because this is what you key in on when you're doing things both stealthily and intelligently. You're screwing up the mainspring. Once you've screwed with the mainspring, nothing works as it did. You start tweaking people's behaviors -- what they crave for, for goodness sakes, there's no telling what else we might be able to ban: Television? Sports? Politics? I'm a do-gooder, so I'm not going to do bad, but if these ideas should fall into the wrong hands, they could literally have us sitting in high chairs drooling all day, with our biggest desired consumer item being the bib! Some nefarious slaveholder with five city sectors of drooling adults, thinking he's their daddy, and all they want is a new binky. Food for thought.

Another asynchronous, angular tactic we could use in the Push for Prohibition would be to make the experience of going to the liquor store simply annoying. If we have some killer traffic studies, all we have to do is gum up the works slightly here and slightly there. Suddenly it's like a wheel with a flat spot, bumping, each time it goes around it gets more annoying. But this involves the road: Smoooooth, Smoooooth, Bump! Those spots become more familiar and more annoying. The many derivations, although they're slight, are multiplied everywhere, with the cumulative effect being, more often than not, either the liquor store's deserted or totally crowded. Havoc either way.

And how about blast furnaces? You've thought of some of the other tactics before, no doubt, but I bet you left out the blast furnaces. The blast furnaces do something similar to what we see in the world's present ecology (global warming), but with the advantage that we can regulate things more drastically, whereas nature's way is to make slight but severe adjustments over the course of centuries. But what if every eighth day it was mysteriously 30 degrees warmer in every building? Or if it happened more irregularly, with less detection, such as fluctuating temps unpredictably between 4 and 18 days?

It wouldn't be a month before world leaders would meet -- 23 days, to be precise -- with interpreters at the ready to gauge the nuances of their speech in terms of how dire things were. Prohibition would be pushed to the back pages. Those of us who are for it would be passing it unseen. As for the furnaces, everyone would be turning them on, turning them off, looking at black smoke one day, and clear the next. Even the pope would worry about that, turning to prayer.

You might think we should tread softly, lest people drink more. No! This is where we want them to drink! For various reasons. 1) To get Prohibition in more easily; 2) Because excess drinking makes them sick and they swear off. How wonderful if we're able to say, "Your ordeal is now easier. They don't even make the stuff anymore. Have a binky."

Everything's going to take constant monitoring, of course, because even with great planning there's always an element of hit and miss. We're looking to steer the underlying culprit, the liquor industry itself, into the ditch. Then with the advent of greater righteousness, the other industries dependent on liquor will quickly rebound with new shipments of things: We'll ban lunch boxes and require sacks for lunches. And trucks will now deliver sarsaparilla and gum.
Posted by dbkundalini at 7:23 AM