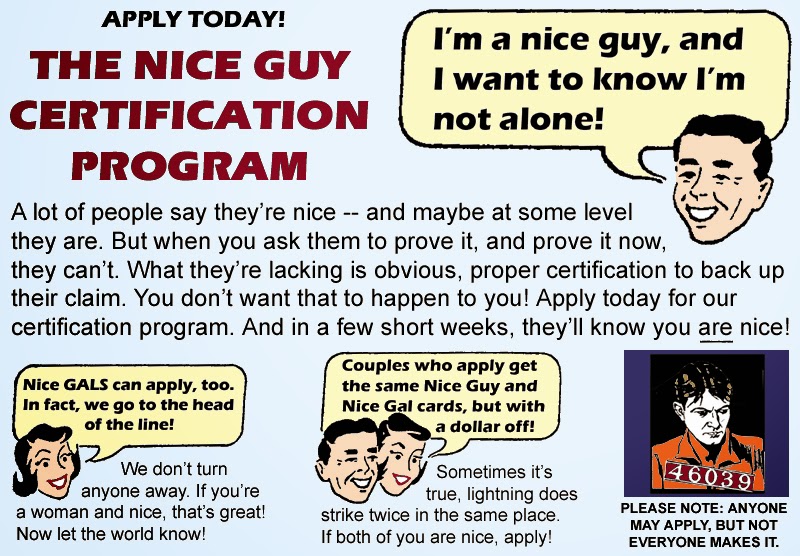 Let's say you're a nice guy. You see some other guy who looks like he'd be nice. Then you're disappointed when he turns out to be a crumb. To me, that's disgusting, because I always expect more out of people. But I've come to realize that not everyone's had the same advantages as me (family, attitudes, proper number of chromosomes), and that they are what they are based on that.

Once you become suspicious, though, and reluctant to engage with others out of this disappointment, you're on a track that's less than pleasing. To you -- being a nice guy -- it's foreign and funny-feeling. Maybe you're not a people-person or extrovert, as I'm not, but you still like to be friendly with folks and get to know them. You never can tell if it's your niceness that will inspire them in some way. An opportunity not to be missed!

Something I believe would go a long way toward making our relationships better would be a certification program, which in the end declares we are indeed "Nice Guys." We'd have a card for our wallet, an actual certificate for the wall, and maybe a medallion to wear as a necklace. I think it'd be great -- say I'm a stranger in town -- to sit down at a table and look around and see a couple guys with medallions. I could go over and not have to wonder if they're nice guys.

So I'm working on the program for this, which could be done in part online. What I've got so far is that there would be some quizzes, some long form work, and some interviews and get-togethers. Eventually, we could have branch offices in major cities, then everywhere, where people could come. That'd actually be better than online, because most of the people I've met online aren't very nice. Something about computers brings out the monster in them.

Speaking of "bringing out the monster," lest you think all this is sweetness and light, the interviews won't just be nice stuff -- I'm not that naive -- but more like psychological torture. Got it? We have ways of dealing with you. Because people's true demeanor comes out when they're under pressure. We will be very accusatory, reduce them to tears, and lambast everything about them, very demeaning and insulting. In general, it will be unpleasant. I can see us having private duty police (on staff) who are good at slapping perps around, who don't take no crap from nobody. They're willing to put the hot light on you and let you fry. You'll be submitting to treatment no man should have to bear. Because we want to see the real you, the nice you.

I'm not willing, you see, simply to issue cards to a bunch of crumbs. In that, yes, there'd be more money, but it would defeat the purpose. What I am willing to do -- as nicely as I can, with a greater focus on being realistic -- is put you through your paces. Which you will appreciate. When I put my signature on your "Nice Guy" card, I want to know, 110%, that you are what you said you were. So the short answer is, If you're not truly willing to prove how nice you are, we'll leave you with the obvious dregs, as forever questionable.

There will be some things about this that you might not expect. Such as: Before you even receive our packet, you might receive a packet from "an enemy organization" -- also us -- striving to see if you've ordered the "nice" packet under false pretenses. I'm very suspicious, because I've seen every kind of double-handed, two-faced, bottom-of-the-deck dealing, scurrilous phonies in my life. And everyone of them had a computer! I'd rather they didn't even apply, but if they do, certainly I want to ferret them out. Trickery will help with that.

Then, to come up with the psychological tests, I won't just doing that myself. But I'll be working with some of the dregs of society, along with good people -- most of these having psychology degrees, some from the most nefarious universities we can find -- to make the questions and situations so scientifically tricky that no one will be able to achieve a really good grade. If you're not nice, you'll fail by 30 points. That's easy. But if you are nice you'll only pass by a point or two. Everyone who passes will pass with a D-minus, which will be a good grade!

Please, though, don't worry so much about the pain before you, the pain you will have to endure. Look ahead to the glory of having certification on something that's truly worth the trouble. Folks will know you've been through hell and back, then through hell again and barely back, and have been shown to be a nice guy. You will be someone -- with your card, certificate, and medallion -- that they'll want to be with. They along with you will literally be refined company.

As you can see in the publicity, this isn't just for "Nice Guys," but gals are welcome, too! If fact we prefer it that way, if for no other reason than a lot of guys like to mix with gals. And if we don't know how nice they are, that's a huge hurdle. We're even putting the gals ahead of the guys! Like Ladies Night. You can go to the head of the line. And face first the struggle, turmoil, and torture of the testing process, so you'll be ready to receive "Nice Guys" coming through after you. That'll be good incentive for them and even something of a reward.

Another big feature I'm looking at is "Nice Couples" applying together, who will save a dollar on the whole works.
Posted by dbkundalini at 2:23 PM