Go Away, Dad, It's Still May 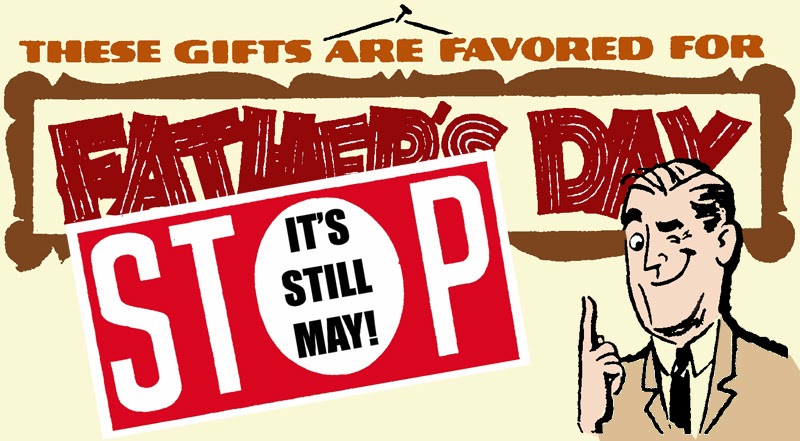 It seems like every year it gets worse, the encroachment of one holiday on another, and opening up the shopping season way too soon. You hear people crying out about it, complaining, and even picketing stores -- Who can forget the great anti-Christmas sit-in of July '74? But they still do it, the moneygrubbing stores, worshiping the Almighty Buck! If they had their way we'd have the tree up in April and Easter in October.

Of course I see it personally every year. I've gotten used to the cycle, and, being as easy-going as I am, for the most part I just shut it out. I expect to see Valentine's merchandise the day after Christmas, and that's that. And the fact that 99% of retail workers have to work Thanksgiving to get ready for Black Friday, I'm OK with that, just as long as they keep their end of the bargain, the promise to keep Thanksgiving some time in the last six months of the year.

Am I seriously supposed to believe what my fool eyes and my other fool senses are trying to tell me?! There better be some mistake here! Even Mother's Day is up for grabs!? Excuse me, this is too much -- cough cough, let me catch my breath... Good Christ in Heaven, is nothing sacred anymore? I saw it the last couple years but didn't say anything, because I was hoping my mom wouldn't notice, and I wouldn't have to explain it to her. But now that she's passed on, I'm taking the gloves off. As for her, I'm glad she didn't hear. I can only picture her rolling in her grave, had we not opted for cremation.

But it's true! There's no mistaking it. It's still May, and has been for some time, close to a month, and I saw it right away, Father's Day gifts out and for sale so early. Of course I don't personally have a dog in this fight, since my dad's also passed away, traditional burial. But I don't think it's a very nice thing to give Mom (the memory of mine and everyone else's still-living Moms) the short shrift. Screwing her once again, this time out of her day-month of recognition.

No doubt there's some lousy dads out there -- deadbeats -- who are OK with this. You have to guess that some of the moneygrubbing guys in retail are dads. Either out to line their pockets, or, to put an even worse spin on it, to totally diss their wives and girlfriends by whom they've had children. Dads, does that show real care for your wife and the various mothers of your children, that you can't even make their day-month special? You have to take it for yourself? I remember when men were men...

The gifts on display are plentiful, too, no shortage. We're not talking about what they do for St. Patrick's Day, which is to have a 10 x 10 foot area of green hats and necklaces in the middle of January. Far from it! There's entire sections of the store, large areas, devoted to things Dad would like: Slacks, shirts, ties, sporting goods, fishing supplies, hardware... Go right on down the line. Anything and everything Dad might like, they've got it, nothing missing, no holding back. Just blatantly ... right there ... in your face, bold as life.

It takes away the specialness of Mother's Day and Father's Day. You know what I think a good dad would want, the all-American red, white, and blue dad? For the store to clear away all those things that appeal to men. Just get rid of them, put them in storage the last week of April. Then keep May, the whole month, centered exclusively on Mothers. And then all the workers work overtime the last day of May, starting around 10 p.m., bringing Dad's stuff back on the floor. So that Dad gets June, the way he's supposed to.
Posted by dbkundalini at 12:18 PM