Are We All Crazy? 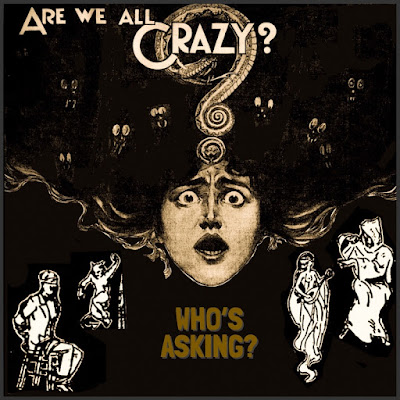 A few of the discussions centered on interests like this, How do we know what we know? Where do we independently stand to know the truth? This stuff usually came out of philosophy, which I still don’t get entirely. Except it's meant to tie you up in knots and get you flunked. Technically it's the love of wisdom, but since it’s so hard to state the terms and definitions describing reality (which is a mystery), it’s every person, object, or concept for itself. That’s what I got out of it, and it’s helped me immensely with the Psycho Squad. “Screw the rules. The rules are ‘Battle stations, entities of every stripe!'”

I can simplify things: Clinically speaking, we’re divided into two basic groups, the much smaller group, normal people like me. Then the vaster group, those who are abnormal in one respect or another. They may have eaten one too many TV dinners or maybe they were born with it, but they’re decidedly different, confirmed wacko. One problem with me, and I don’t admit anything bad very often, is I only have one Psycho Squad ambulance. If I really applied myself I could have a thousand ambulances and a million employees! But the few employees I have now pilfer me almost to death, so if I were any more successful I'd be completely broke.

Think of the dilemma from this angle: With that many people lost in their mental problems and essentially incapacitated — except for their strange unerring ability to act as criminals — I couldn’t afford to screen a staff with the percentages; they themselves would be 80% psychotic! Just keeping track of who’s nuts enough to be semi-normal would be too much. The only solution would be to have a vast facility and an unlimited number of holding cells for when they acted out. But getting staff who aren't sadists, sheesh!

Anyway, I guess I'm happy enough with operations the way they are. Small enough to be flexible and big enough to keep myself neatly dressed. Plus, it does allow me enough free time to chart out how massive my problems are. I keep a blackboard in the garage and update it daily depending on the previous day’s experience. My PQ rating (psycho quotient) goes up and down, which is my take on the social environment. I buckle down when it’s high and loosen up when it’s low. It's about even now, so I'm simultaneously buckled and loose.

But it's all good. I get a few days rest, the PQ goes up, we work like dogs, then enjoy a few days downtime. It’s a great job. Although I'm stuck with the sneaky feeling that I may wake up someday and discover the real truth, that I've been locked up and sedated my whole life.
Posted by dbkundalini at 6:00 AM