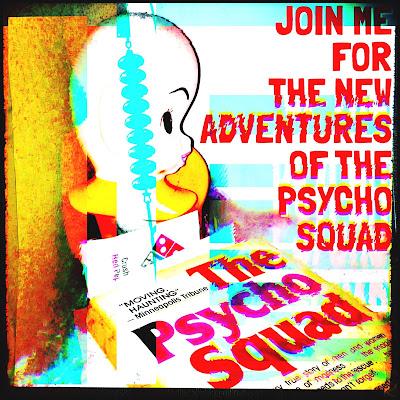 We have wreckers for cars that break down. And ambulances for nervous breakdowns. That's basically what you need to know. And people to drive them and ride along.

I've had wreckers come help me; that's a complicated business. You'd think, hook the hook to the bumper and drag it in, simple. But, no, there's lots of different cars, the places where the hook needs to go varies. You even have to have it so when the wrecker stops, the car stops. Get that? It has to be cinched up real good and tight. Then the other thing, they have to be able to turn corners without it flipping off or getting twisted at the chain, etc. It's so complicated, if you have the slightest qualms about having what it takes, go into brain surgery instead. It's easier and the pay's better.

That's where I come in, one of society's heroes, somewhere between the wrecker guy and a brain surgeon. In fact, that'd be a terrific logo, a wrecker pulling a head to the service station. That'd be a funny logo, something everyone would remember. And it tells our story in its basics; just as a car breaks down, we break down. It's nothing to be ashamed of. No one blames a car when it has problems. I guess I have, but it doesn't do any good. But who among us hasn't kicked a car or even taken a sledge hammer to one?

With people though -- and I'm a people person, not a cannibal but I love people -- I treat them as well as possible. The least little thing, of course, and they'll sue the pants off you. Especially if the problems are more mental and not observable, just the symptoms. They can imagine you did all kinds of things. And say they've got split personality disorder, they think they know what you did from five different angles. Tough to disprove even if you have a split personality guy as sideman.

Anyway, it's a tough business, but gratifying. It's good to know you're doing something everyone else only dreams about. But those folks can wake up and take a sedative and go back to sleep. We have to face it, this is the reality of life, terrible, boiling over crazy, you wake up with the heeby-jeebies and that's the way you go to bed. Half the time I'm afraid to face another day, but then I think, at least days are twice as nice as nights. Especially with a full moon. It's been a while since I was surrounded by psychos on the highway. Say you're threatened, just howl yourself, keep 'em confused, they don't know who they're looking for. Then phone for backup.

I wanted to do this job since I was a kid. I also wanted to marry a redhead. Three redhead wives later, I thought, try a blonde. So here I am, doing the job. The ambulance is a seductive mistress, also redheaded, a red light twisting the night away.

One of my old classmate friends wanted to help people when he graduated. So he went to work for a home with mental cases. They were locked in, he was locked in with them. He showed me the bite marks on his skin one day, even dropped his pants a couple inches. Teeth marks from people with teeth better than mine! I thought the obvious, you gotta be crazy. I’d really hate to be their dentist...

These are my adventures. Which I try to keep tame. If nothing interesting happens on any given day, that's good, that makes me happy. The more boring, the better. Lack of bite marks, my goal. Avoiding redheads? Lock me up and throw away the key if I cave. Bald's better.
Posted by dbkundalini at 6:52 AM