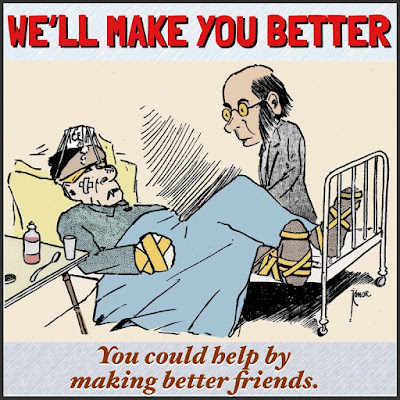 For a lot of the guys we deal with, the Psycho Squad is the best friend they have. And their so-called friends, the guys on the block, are their worst enemy. But try to convince them of that. They still turn and run. They always seem to think we're somehow the enemy. So we're bobbing and weaving, avoiding angry fists ourselves as we chase them up one alley and down another. You always hear these are mean streets, the alleys are no picnic either.

Then later I walk the hospital halls and see a lot of injuries, which is terrible. Mostly for our reputation. Because a lot of misinformed people think we have something to do with it. When we certainly don't. We play by the book, our only mission to help unfortunate souls and return them back as productive members of society. It's right there in black and white in our literature, and, frankly, my arm's getting sore lifting it to swear that we're clean. But that's a fact!

We might need to get some extra PR on this thing. One, it'd be a good way to keep the liability insurance guys happy and the rates lower. Maybe send our guys out with big foam gloves and hands, like in the stands at football games. A few huge pointing foam gloves and the public would have a better idea about us. They might even associate us with the football team, always known for playing clean. The rooms are padded, but the rooms aren't seen by the public very often. We might need to look into padding for the ambulances, the uniforms, everything. And rename the business Kid Gloves Psycho Squad, anything to keep our reputation.

How hard is it to believe that most of these characters -- several have a terrible sneer and gargle glass -- might run with the wrong crowd? You see it first thing when you're on a run. Most of the time I even leave a guy with the ambulance so we'll have tires when we get back! And of course windows, seats, a steering wheel, whatever we might need to keep a functioning unit. Then some of these neighborhoods are so tough, a gang of guys could pick up and move your ambulance just to set it in illegal parking. And that's mean. And to think these are some of the same guys I used to give butterscotch candy to as kids. This is the thanks I get? Hardly anyone just wants to be friends anymore.

Anyway, a perp might be pretty badly mangled by the time he's in the psych hospital. But I'm assuming they know the rules of their neighborhood: Don't look at someone else's girlfriend. Don't look at someone else's boyfriend. Don't mess with another guy's dog. Don't get in the way when they're dismantling a firetruck or Psycho Squad ambulance. Don't steal candy. Stop on the red, cross on the green, watch both ways in traffic, don't litter. I actually lost a friend a few years ago, knifed right in the heart. He'd unfortunately committed the trifecta of sins: Looked at someone's girlfriend, petted a guy's dog, and crossed on the red. But it's been a few years now and most of us have forgotten him.

So our job is hard enough just getting these crazies to the hospital, there's no way we want to extend our little visits by roughing them up. We're like everyone else: We want to cut every corner we can to get things done faster, not prolong the agony of being with these guys. And the only way to do that -- when the natives are cooperating -- is to bring 'em in clean and ship 'em out clean. Any trouble along the way means more paperwork, more explanations, and higher insurance. Plus dirty looks from nurses, definitely something we try to avoid...
Posted by dbkundalini at 6:24 AM