What The—! Seriously, What The—! 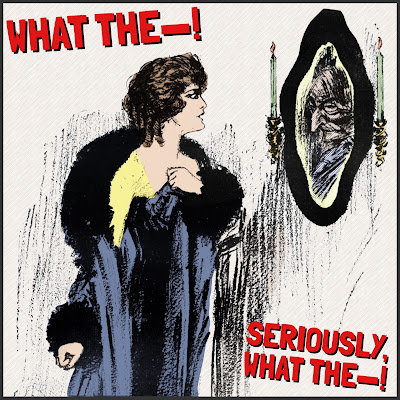 Most jobs are like the work of the Psycho Squad. You do it enough and you get it down to a science. Even easier when it's supposed to be a science, gauging the behavior of folks and psychological tinkering when they inevitably screw up. Which means a lot of variables. Like eating a BLT, your gut has three distinct food groups to digest and bread's the ringer. It's so complicated a lot of people don't survive and eat something else next time. And poker comes to mind, holding, folding, bluffing, complaining, distracting each other, underhanded dealing, and secret signals. It's a tough game and I've got the scars to prove it.

With psychos you have to look for every edge. Forget BLTs, their lives are a smorgasbord of food groups no one likes. They're sick and they can make you sick if you're not careful. And they don't give a squat. They hide, they lie, they deceive. You've got to stay ahead of them. Think of yourself dealing with mental flamethrowers and you'll stay ahead. People tell me they’d like to do what I do, run the Psycho Squad or work for it, and I laugh like a bowlful of jelly. Because it helps to think like a psycho without being one. And that’s tough to maintain. I was so into it one day they mistook me for the case, tossed me in the clink and threw away the key. I was steaming, because it took an hour and a half to grind a new one.

So the people are a terror. But you don't want to focus on that all the time. The average guy has a good side and an evil side. Like the lady in the picture. Someone called me on her for having a good and evil self. Which turned out the exact opposite of what you’d think. The mirror side of her was what I'd call the real side and the young beholding side was the mirror image. Like in a hall of mirrors. Lots of reflections of yourself from many different angles. I used to do that with a mirror so I could comb the back of my head. Then it got to the point where I went bald on the front so I gave up on the back. I run my fingers through it now and haven’t seen it in years. I don’t know what it looks like. According to my fingers, there’s something there, but what, I don’t know and no one ever tells me. It's sort of crusty. There's a Psycho Squad lesson in there somewhere.

Maybe you're always looking for ways to identify whether you have a psychosis and related states. Here's some pointers: If no one acts like anything’s wrong with you, you're probably OK. Or they might be faking it until they’re safely out of your presence, then they’ll organize and invade. The best way to know if you’re about to be picked up is this: Wait long enough and if no one shows up, you weren’t about to be picked up. But remember, if you’re going to be picked up, they never just show up; they're organizing. Hang out, chill, and if someone kicks in the door, that'll be your first clue.
Posted by dbkundalini at 6:39 AM