The Most Attractive Men 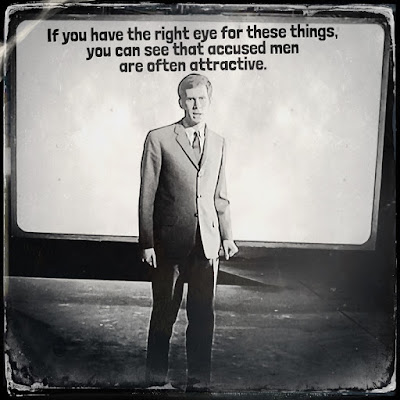 What do I find attractive? Depends on the day and the eyes I wake up with. But attractive or not, everything's off limits till we boldly go after it. Rubber stamp a court order, barge in, this is a take-down, a shakedown. And the rules are on our side. It's a bad time to be a perp. Even if I only imagine myself doing something criminal or psychotic I know how they'll take me down. That's a good perspective to have. And that the two ends of every life are birth and death.

Attractive? Sure, my mind goes there. I mentioned kindergarten teachers before; they've got it goin' on, even as I consciously wonder, "Who do you think you're fooling? It's been done to death." Then there's tougher gals, making the two extremes, innocent and guilty. We just covered all-night waitresses. And there's everyone else, of every tribe and nation. I used to see those pictures of naked ladies from other tribes and a bone in their nose and not get it. I get it now. The guys there are desperate.

So we're looking at the balance between the absolute innocent and the absolute wanton. And there's a lot to that — it’s in the myths, the mommy that babies you and the mother who guts and fillets you. I hope waitresses will forgive the jab, but next time I’m in your joint how about a grin for the road and not the blunt end of a frown? You could've killed me in the crib but you didn't.

Sure, accused men, even the psychotic, are attractive, the center of their own nucleus and gravity. Who doesn't know that? The law swarms them, never to their liking. Even if the accusation isn't immediately clear, round up the usual suspects and we'll sort it out. In the picture Josef K acts like he doesn't know why he's under arrest. When the evidence is everywhere. He can't contain it. Everywhere he goes he's clearly seen, bad behavior massively askew and guilt pouring everywhere through the cracks. He could've just died in the opening scene rather than stringing us along and gumming up the works. Dispatch him quickly and give us the rest of the day off.

But if we must work, let's work... Get on with the important mission of spotting the guilty, the confused, the infirm. Frankly, it’s all I can do not to tackle and arrest people simply for their own good. You see them a mile away and what they’re up to. You know where they go and you know what they do there. There's no reason to hide behind niceties, it's disgusting. And if I know that much, there's no denial of the rest. We started out with enough to go on, pal. Let’s get you some help, if you'll submit before it's too late. And if it takes pouring money into another ambulance or two -- I'd love to have a vacation instead -- so be it. Every little bit helps.

You all have something you can do to speed things along: Don't hide in the shadows. Surrender immediately, confess. We're not going away. We're going to get you hook or crook. But you'll be fine. What exactly are you trying to protect? What you've got's no good; let's make it better. You know me. I'm against all wanton feeling up, all invasiveness. It never happens. Don't listen to anyone. I'll cuddle you like you were my own family jewels.
-----
Photo from movie "The Trial," starring Anthony Perkins. From the novel by Franz Kafka.
Posted by dbkundalini at 7:35 AM