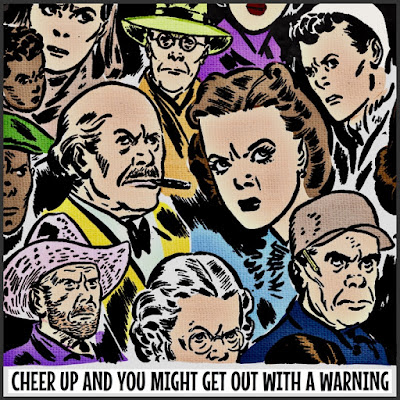 Everywhere I go as a mental health guy — head of the local Psycho Squad — I share the same positive message of moral uplift, good cheer and behavior. Because for the most part I have the world’s greatest attitude, only so often what I get in return are folks looking back at me tough as nails, like they’d jump me in a second with a ready shiv. Yes, there’s a few cheerful ones. I try not to take all the credit, but I figure they’re also inherently mean but briefly piggybacking on my good cheer.

It’s amazing how many folks I run into in the course of a day. I take the dog out and there’s strangers everywhere, walking up or down the street. Serious question: Whatever happened to people walking on the sidewalk? Why are they always literally walking in the street? I have some theories on that, but when you’re in my business, you have theories on everything. Like my theory on squinting: I sometimes squint my eyes and seem to detect that people with psychotic tendencies often live in houses that appear to be melting. (A true result of squinting, and if verified it'd be a great tool for diagnoses.)

Really, it seems like I see more with my eyes squinting than wide open! I don’t know if there’s any relation to how you fix your eyes (open, closed, squinting) and the accuracy of discerning life's secrets. It’s an interesting theory. Maybe one of these years I’ll make a New Year’s resolution to squint my eyes more than ever and see what kind of year I have! It’d be interesting to squint your eyes in rush hour, because I believe I’d see a lot more accidents than otherwise. I seriously don't have the time for accidents and the nasty aftermath, but it'd be a great way to meet new people in distress.

I don’t know what you do for a living, but unless you’re with the police or bill collectors you don’t see as many sad (and mean) people as I do. To normal people, there’s nothing more fascinating than the Psycho Squad. I get a million questions from normal people, all asked with a big wide-eyed look of true interest on their sweet faces. The first thing normal kids want from me is to blow the siren. Which I can’t legally do, but if they promise real good not to report me I’ll blow it for a few seconds. Then there’s kids and adults who aren’t normal. Sensing me in the neighborhood, even without the siren, they duck down quickly inside their melting houses, trying to stay hidden from the light of day, and doing ... who knows what? There's so much squalor of their very dim, sun-deprived houses or apartments, it could be anything. It's bad for property values for sure, too much melting.

If you get a bunch of folks together — say someone's reported them for abnormal tendencies — and I show up, with a blank sheet of paper to take down their info, you have never seen a bunch of sadder pusses than the look on these folks! Grimaces! Frowning like concentrated evil, furrowed eyebrows, bald heads flushed pink with social disgust, really the whole gamut. What can I do but run ‘em in, and let the system sort ‘em out? Yes, I get it. They hate me. But I’m pursuing their ultimate happiness, and if they can prove they’re not a danger to themselves or others, and that can sometimes be a struggle, they can go back home. Folks, the answer’s easy: Put a nice smile on your face when I’m around or face the music.

They could duck down and hide when I go by, but somehow I’d still be drawn to them and they to me, and I’m not sure anyone will ever get away.
Posted by dbkundalini at 6:00 AM