Innocence On Her Breath 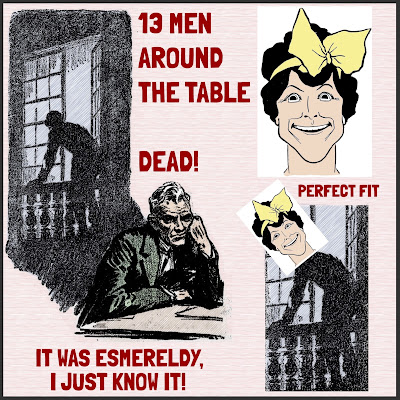 
The lessons of the murder scene were clear: 1) You're surrounded by psychos; 2) They'll try anything. They're not bound by good behavior. And I'm just going to throw in ... 3) Esmereldy wouldn't kill anyone, let alone 13 men around a big wooden table, a nice table that anyone would be proud to own.

But that's what the old mogul who lived there -- Boris -- would've had us believe. "It was Esmereldy, I just know it!" he insisted, his suit soaked with blood, a big knife with his fingerprints (doubtless) all over it, and him the personal enemy of those killed. How'd we know they were personal enemies? You wouldn't kill a roomful of friends, that's clear.

I got there about the same time as the cops. But they were a little earlier, since they'd already handcuffed Esmereldy, now sitting in the corner. Darling, sweet, innocent Esmereldy! Everyone's friend, not an enemy in the county, generous to a fault, always giving out little horehound candies to anyone not already sucking on something. And she might even stick one in your vest pocket on the assumption you'd want it later.

The cops had done short work on the case, as I said. Mostly because State was playing Tech in the big basketball game. And they were tuned in to it, leaving the suspect to wait till halftime before heading back to the station. I went in trying to talk about the case but they hushed me, waving me back. So I went back in and saw Boris, trying to look all innocent, and Esmereldy, bound but not gagged, bowed but not broken.

I sat there thinking. Then when the first half ended the cops came back in and were about to wrap it up. I pointed out all the pools of blood around Boris, the fingerprints, and as a long shot, even mentioned the life-long feud he'd had with the victims. Then there was Esmereldy, with her endless supply of horehound candies, offered freely, never expecting the slightest favor. Quite the contrast.

The head cop thought it over, scratching his scalp with the barrel of his gun. A second cop went snooping around Boris, dipping his finger in the blood and tasting it. He said, "Hmm, he's right, blood." And the third was even more forward, getting right in Boris' face and saying, "You always hated us, didn't you!?" He used to play in the area as a kid and remembered Boris as the meanest guy in the world.

I was getting anxious. In the confusion it was becoming clear I had no decent way to bill this job and get paid. But even if I didn't get anything out of it, just to clear Esmereldy would make it worthwhile. Yes, Boris was a mean guy when we were kids, and if truth be told he was implicated in every murder in the area for 20 years running. But he always went free, blaming the maid, butler, or paperboy.

I'm no lawyer, but I made a convincing case to the cops. "Guys, halftime's almost over. And if I had to choose between a sweetheart like Esmereldy, always giving out horehound candies, and this old bastard Boris, blood dripping even yet from his sleeves, this time I'd pick...." I paused for effect and alternated my pointed finger toward the suspects: "My - mother - told - me - to - choose - this - very - ONE." The finger pointed straight at Boris! His head sunk. I thought he'd given up, when his hands came up with an army bazooka. "Stand back!" he yelled, then began firing the thing! He took out the china hutch, a nice piece of furniture.

The cops moved back, taking cover. It took me -- remembering my many citations for bravery in the face of psychos -- to do something. Esmereldy saw my personal quandary, that I lacked confidence in the sight of danger, and by sheer intuition tossed me a horehound candy drop. I love the things. Once in my mouth, I was rejuvenated and marched boldly toward Boris -- stomping, really -- and single-handedly disarmed him. But not before he'd blasted out the electricity...

Now the cops really sprang into action! No electricity meant no TV! They moved en masse against Boris and in seconds had him in custody. We got to the police station in separate vehicles, so I had no idea what was going on in the paddy wagon. But there had been a minor scuffle and Boris was dead, somehow decapitated, no one knew how. They had no choice but to chalk it up as "just one of those things."

Esmereldy let out her great hillbilly girl rebel yell when State beat Tech. We concluded the evening with horehound candies all around. The next morning I woke up with Esmereldy at my side. I'm hazy on the details. But guess I was wrong about her innocence.
Posted by dbkundalini at 9:16 AM