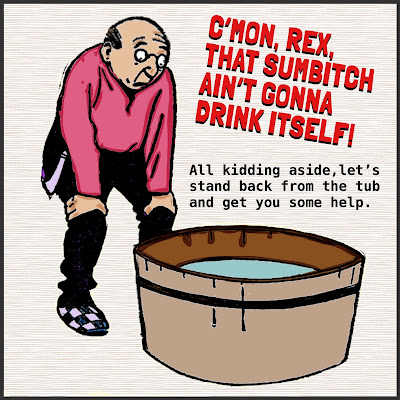 One of the common causes of mental malaise -- the feeling of it, no secret to anyone -- has to do with the things we own, possessions and status. And that's nothing to mess with. Ask anyone. I know because I've lived, been there and learned. You look out on the world and see others more prosperous than yourself and wish you had it as good. In this case, this guy's hopeless feeling's were as obvious as anything: a heavy dose of envy, jealousy that he didn't have a swimming pool like his neighbors.

I grew up in an average town, and guess what, the neighbors across the road had their own swimming pool! And there was my family. When we wanted to swim, we had to do it in farm ponds (with relatives) or the state park that had an average beach. But one time I did get to swim in their pool, a really fun experience. All these decades later, it's no longer there; it's been filled in and is just a lawn. With the neighbors gone, who knows where, probably heaven. Proving the old adage, You can't take it with you. Unless they actually did, since, again, it's not there any more.

Anyway, we know people tend to get anxious if they worry too much about things: What's wrong with me? Why can't I have nice things? With enough thinking like that their eyes glaze over and they're not quite with it. I'd guess all of us have suffered it at least mildly. You just can't allow it to get too strong a hold on you because then you can't be happy. Instead, if you're always able to look on the bright side, the things of your life, what you do have, that helps. Compared to lots of people in the world, you're miles ahead! I said to this guy, "You've got a tub, Rex! OK, it's not a swimming pool, but it's the next best thing, a little pool." A personal pool. Certainly a guy can bathe in a tub. Plus, I bet he's even got a bathtub somewhere; in the bathroom going by educated guesses.

All Rex needed to do was step back and realize how great he had it. But in the people-business -- in the Psycho Squad we do lump Pool Envy with the broader condition of General Envy as at least proto-psychotic behavior. And if you think that's weird, I had to help a guy once with Lunch Meat Envy. How can anyone have that? you wonder. Yeah, that is weird; I ate so much lunch meat as a kid I'd go ballistic if anyone even suggested it. My team wrestled me to the ground once when I merely saw a lunch meat sandwich. The only way they could bring me out of the delirium was rubbing cheese under my nose.

I didn't rub it in with Rex in this case. Just coaxed him along, assuring him I was there to help. "Go put on some trunks. We'll warm the water and I bet you'll be thankful after all for what you've got, a pretty nice tub! You know, Rex, they don't have tubs as nice as this in Pakistan..." Rex soaked for 20 minutes, smiling the whole time, a happy ending for all.
Posted by dbkundalini at 5:50 AM