Best Therapy In The World 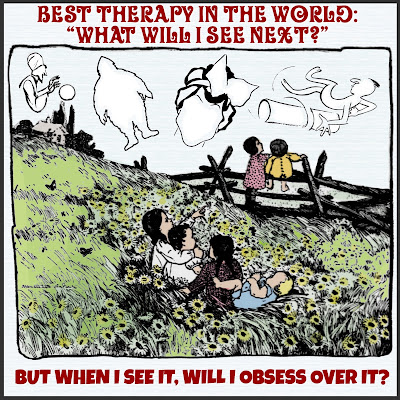 Among the great goals of the Psycho Squad is -- raising my right hand and lifting my eyes to heaven -- "To restore precious equilibrium to those unfortunate souls who have had something go wrong with them, be it a short-circuiting, a mainframe failure, the need to mentally update to the latest OS, or trying to compute with punched paper tape in a gigabyte world." It's a huge vow, because think of the tape in those circumstances shredding and catching fire trying to keep up. That's something we hate to risk.

I know, friends, sometimes I come across Machiavellian [an apparent bastard] in the way I describe the things of the Psycho Squad — because, face it, with my level of experience, there’s a certain hardening and even resentment that appears when you can’t just cure everyone and get a decent vacation. But to be completely honest without tooting my own horn, I’m the most compassionate guy in the business. I’ve been told that by some of the patients themselves, the good ones. Because there’s some real dummies who have the wrong idea about me and aren’t afraid to say so, lots of blubbering and one syllable words, most starting with F. Not everyone can be cured, that’s the lesson...

Do I ever finger angrily in their general direction? I'm not going to say I do and I'm not going to say I don't. One guy said he saw me and even phoned it in. But I could've been pointing at a UFO for all he knew. And I could stop anytime I want. UFOs are rare. I'm not that invested in it. I could show the whole lot of them where to get off anytime I want. Or tell them off to their face even with their own grandmother standing there!

Remember, it wasn’t my idea for people to have these mental problems. I just piggybacked on an existing problem that needed workers. And since my dad worked in the Psycho Squad, it was a natural path for me. In fact he’s the one who taught me the great compassion I have. He kept it real. I’ll try to tell you while keeping the blood and gore down to a minimum. He demonstrated it with rabbits. Because we used to do a lot of rabbit hunting and I had to learn the whole gruesome process. Which, on second thought, I better not describe or I won’t have any readers at all… Let's just say that -- blood or no blood -- a certain amount of compassion is good.

And let’s also say I was brought up in a compassionate environment. He lived by those values and that’s the way I operate today. Other guys see our patients and potential patients — if you see a cross-eyed guy staggering down the street you'll also see him later in our ambulance — as just more money, money, money. But I see humanity in a pickle and me as a helper, and the money, money, money comes later. Which I can then righteously frolic in and toss in the air.

It’s charming — looking at the graphic — what little kids can see when they look at the clouds. Some of the things are easy to imagine. I mentioned rabbits. I can see rabbits in the clouds nearly everyday. Because they’re fluffy and their ears might be straight up, at an angle, or tucked back. The key thing in the clouds is nothing bad's happened to them yet. They're fluffed out, healthy as a horse.

But you can see other things, depending on where your head is: If you see the innocent things kids see, you’ll live long and prosper. But if you see guns, knives, grenades, bags of loot, and other nasties, the Psycho Squad will be seeing you very soon. “Hands behind your back, please, this is a plastic tie. It will not hurt you unless you struggle unnecessarily. We are here to help. Please give up and relax, sir, and this will be much easier for you. You’ll be out before you know it, within the next few months if you're lucky. Remember, we passed the quiz, we are certified, we are your friends."
Posted by dbkundalini at 6:20 AM