You May Have Psychotic Tendencies 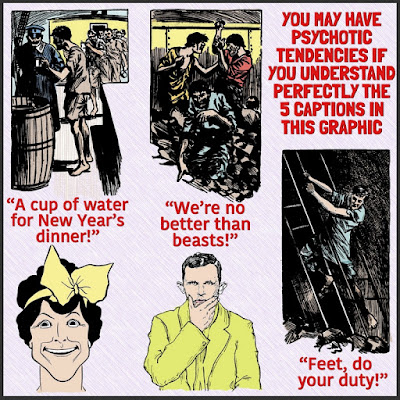 Something most of us share is a great hope for the future. I believe there's a correlation between hoping for things and getting them, even if it's nothing more than an occasional coincidence. You certainly see it at the personal level. You tell your mom you hope for a dartboard at Christmas and there's a pretty good chance you'll get one. Unless you have a bad history with darts as some families have. If you ever threw a dart and killed a brother, ask for something else.

In the Psycho Squad business we’re always hoping to pin down the things that accompany psychological eruptions. It’d be great if we could predict when they're going to happen, who the parties are, and where they are. With there possibly being a few drawbacks. You'd still have to let it happen before you jumped in. If we had the stun gun ready and jumped the gun, right there's a lawsuit. And if you've ever seen a certified psycho with a certified lawyer, they want so much money they're both psychos. Let me underscore this point: Even if it’s statistically likely someone's going to go completely nuts and kill half the state, wait! Maybe put up some netting at the ceiling, that's it; you could save a few lives without being an accomplice.

And after reflection, I'm thinking it's not smart to predict things too accurately for other reasons. If I showed up at someone's place to treat them preemptively, after a while they’d think it was me that was making them sick. Business would drop off, I’d miss out on meals and get hungry. And I wouldn’t be able to afford the few meds I take. I’d start acting out, getting crazier and crazier, and pretty soon a different Psycho Squad would take me in and predict all my future eruptions.

So it's the element of surprise that keeps me in the green. Making me resolve, “Even if I know who’s going to act out, I will do nothing about it in advance." In fact, I might just wait till all hope is lost before responding. Then drive five miles out of my way before turning around, so the exacerbated consequences will yield more profits. Soon society will be so bad off that my work will be publicly subsidized, with greater and greater profits. However (and this is a good point), I can't purposely fail too much, because then the competition would overtake me. Plus, if I was always late and they were always early, that'd hurt my self image; I've always been proud of my punctuality.

Anyway, I started working up a few psychological tests (see above), but I think I'll junk them now. We need to keep psychological stuff, and certainly the world of psychoses, a little quieter. We really don't want competition. I won't even explain the graphic, because, honestly, that one graphic is the key to everything. If the competition had the barest inkling of the arcane implications of those five graphics and five captions, that'd be it! So I will leave it posted only briefly, a few minutes, OK? And, please, no one make copies of it. Even now I'm going to print off a copy and immediately burn it. Must -- keep -- everything -- secret.
Posted by dbkundalini at 6:00 AM