Sky High, Beyond All Limits 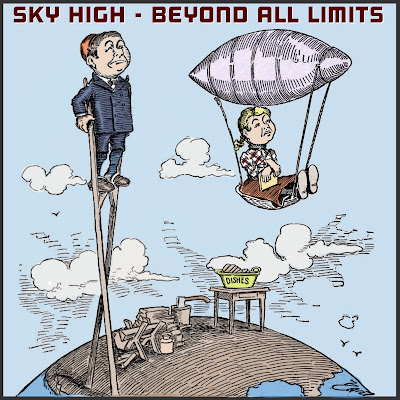 It’s great for my outlook to see how much good the Psycho Squad actually does. I'm guessing 99% of the progress in society — specific acts of graciousness, the general sense of goodness, and outright love — is a result of our important work. Whatever else the species accomplishes after a lot of false starts and bluster results from the sheer benevolence of life. Remember this, life hates a loser.

But I have to be humble. Because I’m sure others could make the case that there's factors they also can selfishly latch on to, giving them at least the appearance of bragging rights. And instead of just immediately throwing up my hands and crying, “Give me a break!”, I zip my lip. Go through the motions of being agreeable. Just remember, Progress has a million fathers and there’s always a lot of 'Gimme gimme gimme' when they’re dishing out the credit. And all the while the truth is obvious, like a slap in the face, the Psycho Squad is the very heart of success.

That’s certainly how I see it in my town. This town had a sense of unnameable dread, foreboding, and future shock until I got my first ambulance. They couldn’t tie their kids down and make them behave. They'd gnaw through the ropes like cotton candy. You couldn’t walk down an alley without a gang of monsters springing up like nightmares to take you on. And unless you were literally carrying a nuclear device you didn’t have a chance. I saw a generation of normal people bite the dust. And on windy days they still blow by.

But the Psycho Squad did establish itself, and we set a few ground rules for evildoers: Submit to goodness, yield before it’s too late, or find yourself under our thumb! Because we put the word out, “Make my day! We’d simply love to take you out! Mess with us, we’ll mess with you, bad, big time bad!” And various other threats. The truth of it can be told now that we’ve prevailed. But we were scared out of our minds and could’ve been beaten easily. But we took the pose of gunslingers, that confident bow legged stance, and for the true killer move we purposely left our zippers down. The universal sign for “We got it!” and “Argue with this!”

It’s funny how that hit people. We were known for it. And for years we literally kept our zippers down as part of a Psycho Squad’s trademark. Then slowly, as we became known for other aspects of the work, we spiffed ourselves up. Kept the zippers neatly up unless, of course, other things were going on. Then it’s appropriate to send the signal, ‘It’s right here, virtually in sight, if you have anything on your mind besides the movie.' Those old challenges were settled.

Still, what a lot of work it was. The Psycho Squad took on so much action in our town we had even the most dangerous cases. Now look at us, “Sky High, Beyond All Limits,” successful in stratospheric terms, striding over the world as though we belong there, as though we own it, dwarfing everything in sight, with our zippers proudly up. And helping others keep their sanity as well.

Of course -- then or now -- these things don't just happen. We're on the scene, always on call. Because we know life is a thing of delicate balance. We never forget it. People go whack all the time. We had one guy, I called him Easy On, Easy Off, not much of a switch. His brain was atrophied beyond recognition. Doctors ordered brain scans and it had all the properties of macaroni and cheese. Sticky, hard to keep warm. They brought us in to counsel him. I took him out in a field and spelled it out for him in a way I can’t repeat, trade secret. He immediately got with the program! And my gun wasn't even loaded.

There was a lady, too. Hate to leave anyone out. She wasn't happy with her old dependable red car. Even when it got her everywhere she needed to go. So we worked with her in two ways, direct patient care and behind the scenes. The guy who runs the junk yard loaned me the same model of car, but one completely demolished. We switched her car for this one. You can guess her terror. She came out, had a meltdown and went into a coma for a week. They fed her intravenously the whole time. Then we put the old car back in place, and when she woke up she was so happy she drove away and no one ever saw her again. That's a happy ending.
Posted by dbkundalini at 6:53 AM