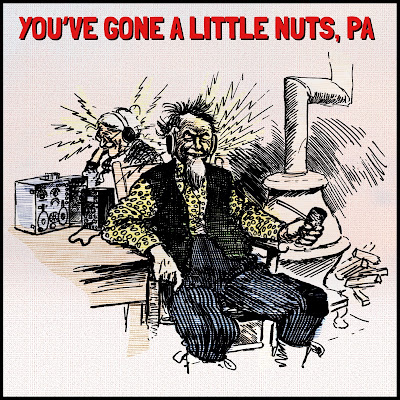 Live and learn. In this post you'll see one of my treasures, the pinnacle of counseling techniques, blue ribbon stuff, makes you wilt. It's not really a technique, just nature, shooting an arrow of realization into a troubled soul. Pa Butler's a good man, only confused for a bunch of reasons. Like old age, confusion, worries, truckers sleeping around, getting divorced, losing their reputation. The cops don't put a guy like that up against the wall. They know he means well.

The Butlers were lovely neighbors of my grandparents. They've known me since the day I was born, and over the years we got old together, them with a huge head start. They got into radio with the CB radio craze. And being close to the interstate they made a lot of trucker friends. That’s a joy but there's also a tragic side; those guys get old and die like everyone else. Or crazy, wrecking their trucks. And all that takes a toll on good people like the Butlers. To sum up their diagnosis, Pa went crazy and threatened to kill Ma for the insurance money, and she might’ve had similar ideas; she was getting a lot of catalogs in the mail.

I tried to feel them out when I was in the neighborhood. “Ma Butler, how you feeling up here, mentally OK or a little dingy?” She tried to act innocent, while sweating it out, sliding the catalogs back into the drawer. And as for Pa, it seemed suspicious when three of Ma’s chairs were put on the curb for the garbage, each one blown to bits. But Ma never suspected, chalking it up to gas pains.

Regardless of age and normal allowances, the time came to take Pa in at the very least, since Ma deserved better than that. Dearest people on the block. But how do you swoop in and bust down the doors, gang-tackle the perps, and pull them out while simultaneously hog-tying them? And if you need a stretcher, with their narrow stairway, forget it. We had to lure them out. Using a girl up the block everyone thought was white trash. Ma and Pa were on their radio and knew we were coming for her.

I radioed them and told Pa, “She’s got that idiot Billy by the nuts and is threatening to make him a soprano!” He radioed me, "10-4," which, quickly looking up the code, is a type of acknowledgement denoting understanding, message received, uh, er, Roger. When the noose was tight, I beckoned Pa and Ma to come out so the girl could see friendly faces and not be afraid. Which worked. They stood on the curb -- charred easy chairs flanking them -- waiting to see dark purple bruises on Billy, perhaps blood streaming down his leg, and didn’t know what hit them when they were suddenly tangled in knots.

They were crying, a sad deal. Ma was collateral damage, and unfortunately she got a little nicked when they tried to cut her free. Then I told Pa bluntly, “It ain’t Billy, Pa... You’ve gone a little nuts, and these nice men want to make sure you don’t pose a danger to yourself or Ma.” He was straining, cussing, giving me the full force of his anger. I told him man to man, “Pa, it’s your turn, pipe down... You’ll be back, better than ever... I’ll check on Ma till you're home and wash the car if you think it needs it.” He melted in the team’s grasp and they carted him off for service. He fingered in everyone’s general direction except mine.
Posted by dbkundalini at 6:30 AM