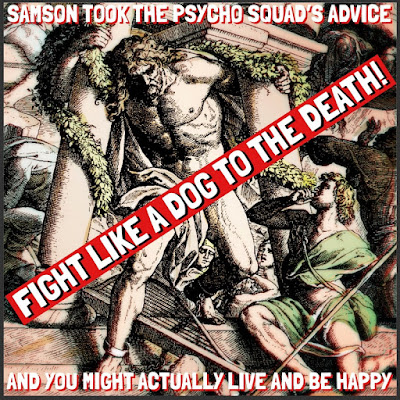 “Fight Like A Dog To The Death.” That’s the Psycho Squad’s advice. It makes sense. We’re all eventually going to die anyway, we may as well fight like a dog getting there. Half measures are for halfwits. The whole enchilada, that's what's happening for those who would prevail. Like my mom told me the first day of Kindergarten, "Get your butt in there, son. Kick ass and take names." Which, like Samson in the picture, is one of my pillars of success. Essentially it means, Do everything you can to better your circumstances.

One of the biggest barriers to our understanding these days is we don't usually see dogs fighting. But it used to be that dogs ran free. They weren't curled up while you were watching TV. But off doing territorial, defensive things. In some cases they did fight to the death. The key thing is the territorial resolve that motivates rugged nature. Like me with a box of glazed donuts; I may not be generous, don't lose your hand testing me.

These days when we say things about fighting like a dog, of course we’re speaking in terms of mental/psychological resolve, not giving up easily, not being a pushover. What if we had the personal strength to make better choices, X Y Z, instead of letting circumstances run roughshod over us? Someone comes in the room and says, "What's this dead body on the rug?" And you're not overly disturbed but calmly calling around to see if anyone's missing someone.

You've probably heard the story of Samson. He was a lecherous guy, having wild sex with temptress Delilah. But she was working with his enemies, trying to find the source of his strength and how to destroy him. It was his long hair. When they cut it he lost his power. They even blinded him, then put him to work like a slave. But his hair was growing back. Finally, when it was long enough to put up a decent fight, he was tied to the pillars of the building and pulled them down, killing everyone including himself. That's the kind of power any of us could use.

But you have to pick your battles. When it comes to the Psycho Squad, I'd rather the guys I take in not fight like a dog to the death. One, we're going to get you one way or another. We have backup. Two, we have insurance, yes, but I hate to use it. If you start destroying ambulances, that's a big deal. Or getting hurt, that's a liability. The Philistines were primitive compared to us today in terms of chemistry. We have enough medicine to put you to sleep for a month. Imagine that, waking up a month from now in a 40-pound diaper. The picture in your mind, let it be a warning.

You could even make the case that Samson got it all wrong, struggling like a fool, no eyes, no prospects of getting back his normal life, he should’ve just given in. That’s the advice we give our patients. I’m standing there Mr. Compassion, but we'll use all legitimate means to subdue you for your own good. Say you're biting through a tire on the ambulance, for multiple reasons that's a big no-no.

But if we have a guy without any fight at all, we're gentle. We have one guy who actually gave me a key and said, “Don’t bother knocking, the bird might be asleep.” So we go in, creep quietly by the cage, give the guy a hypo, get him help and he’s back home in a couple weeks. We’re even compassionate with the bird, put a box of food by him, a gallon of water, and the Sunday newspaper.
Posted by dbkundalini at 5:46 AM