Stanley -- The Spirit of Evil 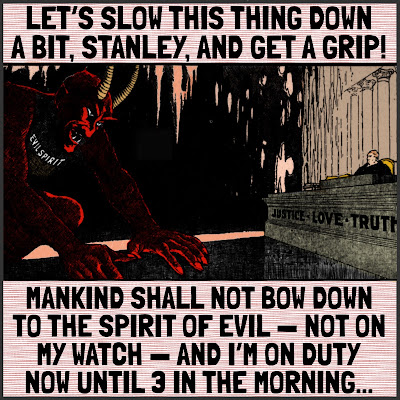 Cases involving people yielding themselves to evil —  body and spirit — are among the saddest to me. But that’s just because they always seem to go the same way, down the tubes morally and socially. But I’m resolved not to talk politics.

Is it wrong to hate evil? I’ve always hated evil. I got it from the Lone Ranger. He was a do-gooder in a world that seemed to have about 12 people. Himself, Tonto, and a few others. The others were evenly divided into two camps, the good townspeople/ranchers and the evil people out to cheat them because of the railroads, claims of gold or water rights. If it hadn't been for this same boring story week after week, I might’ve never learned morality.

And with me in the work of the Psycho Squad there’s always evildoers. Saddam Hussein wanna-bes, apparently, without land to conquer or nations to terrorize. They take their half out of the middle, acting goofy around people, breaking in, trespassing, often getting their jollies under the influence of something strong, booze or narcotics, so they’re only about half there, but it’s the half that’s entirely bad, the worst part. I'd love to run a full-page ad. A big picture of me surrounded with a description of my morality and how I got there. Then some earnest rage tearing people a new one, ripping them up one side and down the other, but ending with a positive plea, "Get with the program, you half-wits!"

In a typical day, the police often call me. It happens more often than I like, because my favorite cases don't involve evil but are just guys who forgot to take their meds and are acting out. I can get those straightened out right away. They go from shackles to home right away and adapt themselves quickly to normal. Five minutes of billing and I'm done. It’s the people who are objectively evil even when times are good that get me down. And someone — do-gooders unaware of my preferences — will call the Psycho Squad. We take down the information, then kick it around. “Does it sound dangerous? Is there someone else we can pawn it off on? Shouldn't we leave a guy that bad for the police? Take ‘em in, throw away the key? It’s not Stanley, is it? Tell me it’s not Stanley! Anyone but Stanley!”

You can almost spell Satan with Stanley if you bought another vowel. But Stanley must not know how to spell, because this loony bin reject half the time thinks he IS the Dark Lord. It’s a sad case. Looming large with his inflated ego. Which is essentially what Satan is, good boy gone bad, left the family and by inflation lacks the smarts to go back. I’m almost of the mind to quit feeding Stanley's ego, because there might not be much left. But if I could get him in a clear mind and explain to him the mythological elements of what he's doing — that he's a base idiot with a Big Idea personified — then he'd have some worries. With the spark of realization and a brick to the head, he might be normal.

This is an issue Hollywood could clear up. Every time they show one of these (ho-hum) Satan programs, run the disclaimer, “The following show is fiction. If you fall for it, the Psycho Squad will get you! They are bad ass and when they're done you will wish you were in hell!”
Posted by dbkundalini at 6:11 AM