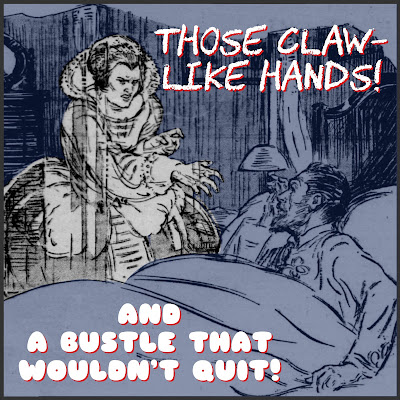 Old mysteries involving ghostly visitations goes back before my time with the Psycho Squad, actually to my dad’s time when he worked on the Squad. At that time there was quite a stigma that went with the work. They hadn't yet gotten to the point where everything was psychological, so they occasionally had to battle ghosts.

I grew up hearing these stories that a kid likes and hates to hear. I actually don't care for ghosts or anything about them. I used to be in the printing business and we bought the equipment from a hunchbacked guy who died very soon after. I was one of about seven people at his funeral. After that I often felt his ghost with me when I worked with his stuff. So I'd freak out and get very little done. But it turned out happily, because I’d leave a note of what needed to be done, then come back the next day. The type would be set, sometimes the job done, leaving me to collect the profits...

But back to the lady in the bustle. This is one of those cases, dime a dozen back in the day, of old women coming back from the dead and terrorizing guys unfortunate enough to have purchased their second hand beds. Men-haters, I’d call them, since you never heard of them terrorizing the female owners of their beds. Which, according to my surmise, meant they were frustrated with their husband in life or overly protective of their privacy under the sheets. Cold as clams. We don't get much of it now, because more recently-deceased women both lived and died with the looser morality we all know and love. We're just lucky they're not pinning us down as we sleep!

But since I'm not in the exorcism business but the psychological helper business I don't usually cast out spirits like this anyway. It's easy enough for guys to give the bed to Goodwill and let it be their problem. And I have to make a living in modern times. Meaning the problem has to focus on the guy with the wallet himself. “You think you saw big bony fingers and a bustle that wouldn't quit. Our minds play tricks on us all the time. Remember looking at clouds as a kid? If you scrunch your face and cross your eyes you can see prunes on apple trees. Keep your face normal and if you hear these weird noises and see these weird bustles and things, stare at the bathroom mirror till your eyes are focused. It's all you... But just for the heck of it, it might help to confidently adjure the air in the general direction you were looking.”

It actually does work. My first exorcism was like that, someone called about 3 in the morning. Could I come to their place? Because there was a ghost or more than one. They saw the legs of someone passing by in the closet. And they heard noises in the basement, like a ghost was about to do the laundry but wasn't familiar with when to put the softener in, so he clunked clunked clunked with the washer lid. I went over, a little scared but believing it'd be OK. They were crying, explaining the whole thing. I went through the house adjuring the ghosts and casting them out, invoking the divine, etc., then to the basement where I checked to make sure the washer was level. The spirits were calm while I was there. And when I got done, that’s the way they stayed, thankfully. The people were happy and lived happily ever after.

The downside of the story is this: The guy's dad came up from Texas a few months later and wanted to meet me. He had trouble with his car, so I let him have one of my cars cheap and he was going to pay me later. He was short $70. Well, dumb me, I can handle ghosts, it’s the living that give me fits. I trusted him for the $70 and never got it. I even called his number and they hung up. But I wouldn't go all the way to Texas for $70 only to have him, like his family’s ghosts, fly the coop.

Plus, I wasn’t up and running my own Psycho Squad business yet or I might’ve scared him straight. A bag over the head, a joyride in the ambulance and he’d be begging me to stop at a payday loan joint so he could pay me back. His kids never had ghosts again, but that dad’s haunted me all these years.
Posted by dbkundalini at 6:49 AM