No Pocus, No Hocus 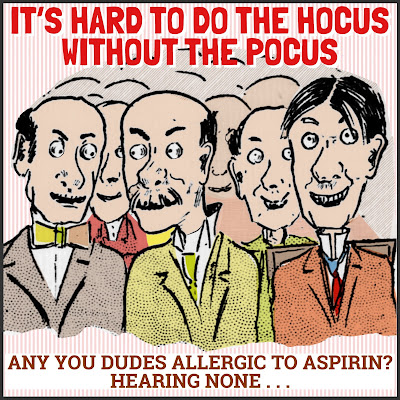 I seriously thought I would make a love connection with Doris the Matching Tie Waitress, but it wasn't to be. Something came between us in what might've been our moment. It didn’t take long for the coffee to cool off and the same went for her. Some like it hot, some like it cold. Who we kiddin'? No one likes it cold. Except her. Although in fairness, she's probably been burned more than once. And maybe she thought I was too eager and a danger to her physical health. I totally understand, since that’s my own normal standard of thinking. Whatever, there was no love connection.

And so I tramped out into cold slumped like a lost puppy, but with a Psycho Squad call to deal with, a group of guys considered off the beam. You never know when these calls are going to erupt. As far as I know, they were as mentally healthy as horses just minutes before. And whether there was a mysterious quivering in the cosmic cloth or just some persistent problem of Monkey See Monkey Do, Birds of a Feather Flocking, or Communal Delusion aka the Jonestown Syndrome, they all went whack in perfect synch.

Was it a massive coincidence? Well, they were all looking for love connections at a gentlemen's club, according to the sworn statements of several more satisfied guys. Which I’ve seen a thousand times. Guys get so stoved up and desperate for affection, and this is especially pronounced at gentlemen’s clubs. Then once rejected their eyes glaze over and they act out in negative ways. It’s rooted in their desires and years and years of rejection, fears, misplaced optimism, etc. Group think is a biggie in men’s breeding genes, and, yes, it edges close to the psycho range.

It’d be great to pool our knowledge of gentlemen’s clubs. I’m not saying I know a lot, about average, but I never put it on my resume. Guys, you need to remember, those gals are pros! They’ve been around the block more times than teenagers on a Friday night. But you look down and see your single solitary self and think you’re God’s gift to women. Maybe you are, but that doesn't impress the pros. They’ve got your number, they milk it for what it's worth, and that’s as far as the service goes.

So I showed up at the Fox's Tail Club, found the group of glassy-eyed Romeos about like you'd expect — one had kicked the jukebox and ended the fun for everyone — and took them in for a while. The worst four I told to sit up straight in the back of the ambulance. The way we handle these guys is scare them straight the best we can. Do they have wives? Do they have jobs? Are they elected officials? We point out the consequences of bad behavior. Throw in an aspirin-flavored placebo and it instantly heals what might’ve been a full blown psycho meltdown.

Then hand them a few tissues and send ‘em behind the building. The same way you purge a good drunk, the body’s normal way of ejecting booze out the mouth, is similar to handling gentlemen’s club rejects. And profitable. I charge $5 a tissue and because they were bad boys they never complain.

Which brings me back to my own rejection from waitress Doris: Dear Doris, darling Doris! I need the hocus pocus... I need the magic back... Because no pocus, no hocus! But, baby, the last word's mine! And I’ll be back to normal any minute now...
Posted by dbkundalini at 6:00 AM