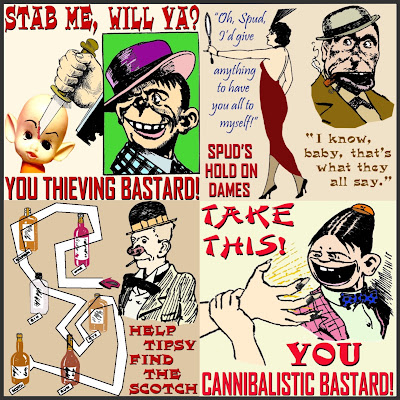 My life’s really been a rich tapestry of doing good and offering help. I've offered a hand up. But then when that hand's been bitten, I've had to kick ass. These are the signs of a good life well-lived.

So here I stand, somebody. A modest man. But in certain ways, a big man, the head kahuna. I’m not just a grunt worker with the Psycho Squad, like Al and Ted, employees outside the scope of this series. I'm a happy entrepreneur, running the Squad, working on this blog, and sitting around shooting the breeze according to the highest standards. There's been moments when I tried to be a people person. One thing, a few years ago I broadened the blog staff: One broad, Myra Kula Electra, and four jailbirds from the local prison release program.

The four also had a looser connection with the Psycho Squad’s main work, but they were so far gone there was no improvement. I tried to help them but it turned out to be more of a disaster than anything. And the grunt work they shared did no good for the blog or anything else. Which taught me that it simply doesn’t pay to be a do-gooder. The average guy already knows that and would've never had anything to do with SOBs like Dashing Danny Whrfr*, Spud Tuber, Stanley “Tipsy” White, and Cannibal. It's all in the past now, but one thing still rankles me; I must’ve loaned each one of these bastards $15 or more over the years and not one of them ever paid me back. They’re completely irresponsible, the lot of them.

But there was something I got out of their worthless hides, and that's the sad experience of being with them. When you’re in the Psycho Squad business everything you do adds up. Some things give me greater compassion, like when I see the kindness of kindergarten teachers, usually cute, often single. They're always the ones that don’t realize how hot they are; they’re great with other people’s kids, what could they be with hers and mine? Then I face reality and let it pass without a word. And use my so-called compassion on equally hopeless pursuits, which brings us full circle back to these release farm rejects...

So I got a little payoff for the misfortune of dealing with Danny, Spud, Tipsy, and Cannibal. I had ‘em close to me over a period of weeks or months; I think it was weeks but felt like months. Was I pissed off at them at the time? Of course I was, because, speaking of hot dates, I had my eye on prize-winning reporter Myra Kula Electra, and then every one of these psycho bastards slept with her at the Fourth of July festivities!

Looking back on it, I recall Myra had ulterior motives and was just as guilty. It took a lot of unreformed sex drive to put her so fast on her back, and in sync with a lovely municipal fireworks display; they really went all out. But her real goal was to undercut me. The four guys were the ones I was most disappointed in: If your actual home is a reform facility you ought to be able to point to some actual progress.

But like I said, there was a payoff, the lesson I learned from the whole affair and how I’ve applied it to day to day operations with the Psycho Squad. Which is this, Never trust any of these guys! I am suspicious of everything that moves and I sleep with my eyes wide open. So when I’m around the most hardened cases my eyes are strictly like manufactured homes, double-wides.

*That’s right, Whrfr. Danny had foreign forebears. Who would ashamed of him if they only knew what their pathetic genes cursed the world with.
Posted by dbkundalini at 6:39 AM