No One Likes The North Wind 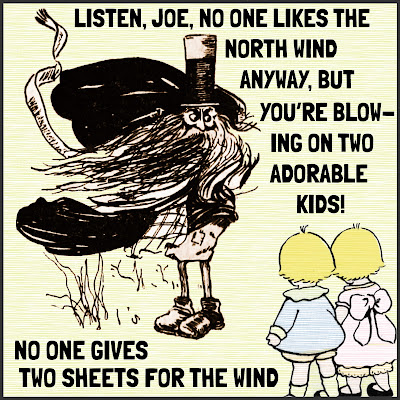 These are the cases the Psycho Squad gets. They say beggars can't be choosers, even though I'm not quite there. It's just when it comes time to pay the bills it's nice to know someone has a problem worthy of the name. "Don't come any closer!" Joe bellows. I put my hands up in the fake surrender gesture, "Whoa, big fella, let's not get huffy. Take a breath -- that's good -- now let it out." Which might've been the wrong thing to say. He blew me across the parking lot.

I know how it sounds -- unbelievable -- but these are the ways a man's mind goes when an evil wind's blowing. Being a mortal man isn't enough for some. He's so whack he thinks he's the North Wind. But I don't have time to judge, especially with that breath. A rancid mix of whisky and Italian breath. Not only were two kids in personal danger, but I had a larger population in the Big City to think about and a toxic cloud.

With long experience, of course I knew the guy. One, that’s a fake beard. And the cape, apparently meant to recall the dark clouds associated with fierce winds, couldn't obscure his features. I’ve dealt with him before. One thing right away, he’s not a pervert, just a poor misunderstood soul. Given that knowledge, a violent response was out. It'd have to be psychological. Take his persona at face value and address him from there. He wants to be the wind, he has to realize even the wind takes a breather, comes and goes, stirs and subsides. It called for a little hypnotic repetition, Breathe in, breathe out. Everything's getting calmer and calmer, there's barely a stirring of even the slightest breeze. Calm and pleasant, getting stiller all the time. Until... peace...

Next the team rushed in, subdued and restrained him fast as ABC 1-2-3, and cleared the scene. Innocent bystanders relieved, the victims returned to mom and dad, leaving us to stand there stoically. "You went a little wacko, huh?" A quick visit to the clinic, get his meds straightened out, restrict him from watching TV weather, as well as the all-important billing process, and he'd be on his way.

But as simple and clear-cut as that is, he still got huffy. “How dare you accuse me of—?” I stopped him right there. “No one accused you of anything.” Then I got strictly clinical: "This craziness may’ve been kosher in the days of Robin Hood, men in tights dropping from the trees, but it doesn’t fly now! All it takes to spoil the charm of life for everyone is one weird clod like you!” What could he do with those condemning words but hang his head in shame...

The fact is the Psycho Squad's clientele is so varied with strange ideas up the wazoo that nothing can be easily dismissed. You learn to suspect the worst, then assume whatever conditions led him to his present behavior would ultimately thwart him. They always go overboard. Say he really is the North Wind. His blowing days are done for now.
Posted by dbkundalini at 6:19 AM