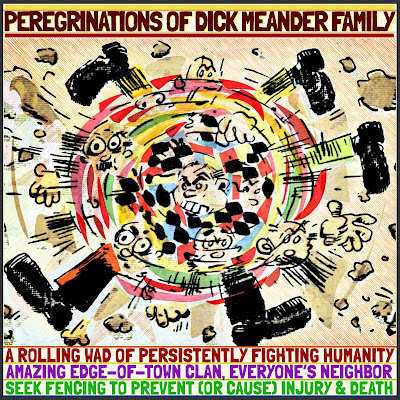 If you're from around here, you're no doubt acquainted with the Dick Meander family. Maybe you don't know them well but you know them at least in passing. Once you've seen them go by -- a tangled ball of humanity, chaos and turmoil tumbling down the street, up alleys and down, through yards, kicking up dust, taking out complete fence rows and weaker trees and who knows what all -- they're hard to forget. I lost a maple tree a few years back.

No one does family squabbles any better or worse than the Meanders. Not to rub it in, but remember the main shelter house at the park that burnt a few years ago? That was during their family reunion. Of course family reunions are never good, but that was one for the books. Not only was the shelter house history, but they burnt a path from there to the interstate because their idiot baby happened to be smoking during the fight.

I actually went to school (9th grade) near the Meander place. But back in those days they were respectable. No one saw the future when Dick married Doris and started having kids. We always think of parents ruining the future for their kids, but with them it was the kids who were the bad influence. Danny was in 9th grade with me, famously kicked out of English class, with the teacher totally shaken, going to her desk for a downer. I never saw Danny again, but his family wasn’t so fortunate. They never recovered.

Ever since, if there's a cloud of dust, a tornado sighting, or any sort of disturbance in the atmosphere, even the slightest register on the Richter scale, you have to see what the Meanders are up to before sounding the alarm. And they simply don't care. They might be watching TV or maybe they're sitting around smoking or polishing pool cues or mowing the yard, when a fight breaks out and they're off, rolling across fields, yards, burning a path, every fight a fight for the ages.

In Psycho Squad work, I've had to waste a lot of time on the pesky requirements of continuing education. But some of it's been better than usual, like when we learn how the surrounding environment is a determining factor in the making of well-rounded psychos. The fact that the Meanders’ home place is right at the edge of town influenced their whole history. In previous generations, they might have gone toward the country and avoided a bad reputation. They’d just be despoiling the wild or killing an occasional cow. But as it is -- these being bolder times, morals are very loose, reputations unguarded -- they came right through town, like they were rubbing our faces in it: ‘We’re here, get used to it, gimme a light, let's unzip our pants and see what sparks...’

And the Psycho Squad has cleaned up the Meanders’ messes for years. I’ve written letters on their behalf pleading for mercy and it’s been granted. But we’re way past that now; everyone's so much more interested in their own property values and expenses than mercy. We tried medicating them, but they’ve developed a tolerance for everything but the hardest drugs. And harder drugs just make them mean, so it's all in vain.

My own personal take on it: I hate getting calls about the Meanders. But I tell myself, it's all billable! Bread and butter. Good for the bottom line. Might pay off my second ambulance early. I just have to watch what I'm doing; I lost a vehicle to them once in passing. Now we treat them like any other storm in nature, hunker down till they pass and pray to the Dreaming God above that we'll get them on the downside.
Posted by dbkundalini at 6:47 AM