I'm Hungry, Lock Me Up 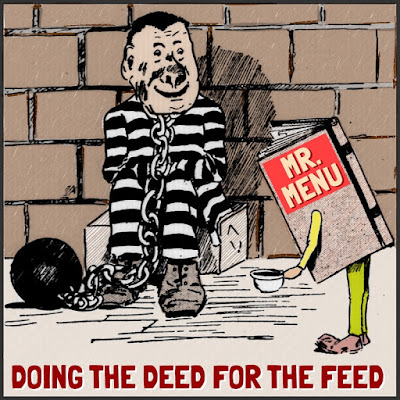 Sometimes I want to know more about my readers. So consider these questions and if you want to tell me about them. I wouldn’t mind an avalanche of responses, millions of replies, requiring a bank of highly paid good-looking secretaries.

What kind of appetite do you have? Are you extremely hungry, totally hungry, or as hungry as anyone ever? After you’ve had even the slightest food, are you totally satisfied, always satisfied, or both totally and always satisfied? Do you hope satisfaction goes away very quickly, very very quickly, or never arrives so you can constantly eat? Do you know the purpose of eating, the purpose of consuming food, and why we eat? Are you embarrassed about normal digestion processes and do you realize that the mere act of eating anything is a blatant admission that you eventually poop? Or do you wantonly go, instantly digesting, even if you've taken nothing more than a tiny pickle?

I’ll tell you what’s normal: What I do. Generally I have three meals a day, which we used to call breakfast, num num, and dinner. Now, with everyone TV-crazy these meals are called morning cartoons, num num cartoons, and evening cartoons. People are TV-happy, cartoon happy, and sitting there with huge bags of fast food, gobbling it down, and throwing the bags across the room at each other! Dogs forage through the mess and never go out to do their business, so it’s a pit. But they're mostly satisfied. As are the flies streaming through the cracks in the house, making a cesspool of filth everywhere. The people who live there are terrible people, saying mean things to each other in a mean way, “Gimme the remote, you shit!”

Anyway, back to my normal home, I shoot for breakfast, lunch, dinner. All done responsibly, in good order. Toast, bacon, cereal, sandwich, baked potato, and maybe something light for dinner. I still take the dog out — she's not shy about going — and I get some exercise along the way, then watch TV within limits. Something to make me laugh, perhaps. Other times, something serious so I’m well-informed, but I scrupulously avoid all news! I remember watching the news just a few years ago and not losing my num num, but I guess it's my age...

I’m just going to say what I always think and let the chips fall where they may: When it comes to normal, I'm about it. And even with the Psycho Squad work — which could jade anyone — I keep my equilibrium, more than any man's entitled to, taking my half out of the middle. Because I need a clear head when dealing with people that don’t. These bastards will jump you in a heartbeat and when they do I lose my num num.

There's one case I remember fondly, Stub's his name. Stub wanted to be taken in because he'd had a hunger for food since he was a teenager. And remembered that the detention center had the best food ever. And it probably did, so he got hooked on it. But when we released him he’d act out again and be recommitted. The way we handled Stub was with great creativity and mercy. We swung by the thrift store and bought him a cheap discarded cookbook. He didn’t know such knowledge existed, so he was thrilled! And now he has his own food truck across town. But he's still a psycho, never opens for business, just stays there cooking and eating oatmeal.
Posted by dbkundalini at 5:51 AM