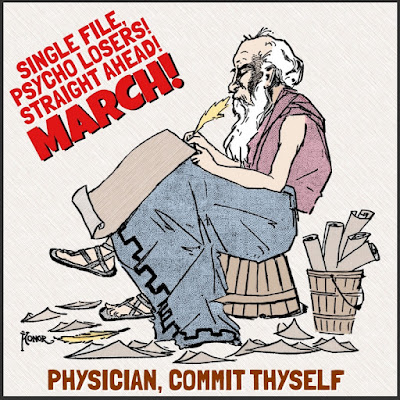 As time goes on, long after my day, when better Psycho Squads are made, I’ll be there, my spirit pressed against the grindstone and sparking like mad. The current generation always builds on what came before. And so it shall always be, until everyone's normal.

Now I'm an old man and I’ve seen a lot of changes. For the most part the changes have been for the better. When I first started, we didn’t know much, we were feeling our way. They wanted to train us “right,” according to the standards of the time. But we were young and brash and said we could do it. We tried, really tried, and it wasn’t always a big success, with the wild massacres of the late ‘70s inflaming things, to say the least. Now it's all ancient history. Because we charted a new course, hating with a purple passion our banning by the infernal "responsible authorities." We had to take a different path if we wanted to eat...

Yes, a lot of guys were skittish and acted tough; they fell by the wayside. Some true talents were among them, too, who could’ve helped advance the Psycho Squad movement. But they wilted like violets, proving themselves namby pamby weak-willed nothings, always there when the going was easy but nowhere to be found when people started dying: “Aggh! There goes another one!” Which to me is when you need them the most. “Suture this man’s wounds! Set that bone! We’re dying here, people! Where are you going?! You can’t leave us! I don't care if drinks are half-priced! They’re locked in the bathroom with a box of matches and enough gasoline to ignite World War III!” ... You realize I'm not talking about patients, that was the staff...

But today is not a day for looking back but ahead, and having the same can-do spirit that made us pick up the loose pieces and march forward. Which, if memory serves, some loudmouths said couldn’t be done. I will be the first to admit, I almost believed the naysayers. Because, really, what'd I know? I was new, still fairly innocent in the ways of the world and personally had some tough times. Now I've had decades to reflect on the mission, but then I wavered. And just before I was lost forever on the naysayers’ path, I found my way back. Big thanks to Cindy Lou S___ for taking me in that night, for comforting me, stroking my hair, etc., and humpa humpa, the dawn broke.

Where have the years gone? Into service, that’s where! We've seen the whole mental hospital scene. County facilities for the mentally wayward. And a relatively recent emphasis on meds to calm and control. I was vehemently against it at first but they subdued me and thereby convinced me, “Yes, this works.” And now I have several prescriptions of my own, so, to be absolutely blunt, I’m chillin’, dude … You still here? Hope you can read these chicken scratches; I can barely read them myself, but hey… I’m OK, you’re OK, no one reads this far anyway. I could say anything or puke all over the place and it’d be all the same...

You know, I haven’t seen a psycho in a choke-hold in 20 years! The old ways have passed. Which was indeed fairly sad, but effective. Cuffed to a nightstand, turn the TV way up, and except for the noise everything was under perfect control. Of course you wouldn’t try that working on your re-cert! I mean, live dangerously if that’s your thing, just don’t tempt fate, that’s all.
Posted by dbkundalini at 6:00 AM