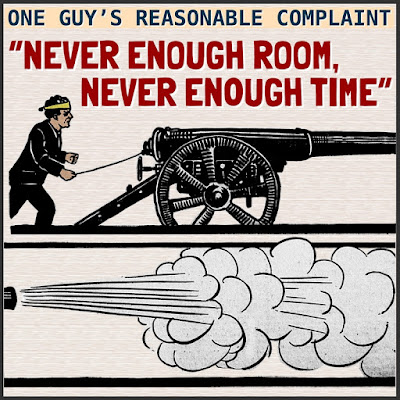 I believe the guy had a reasonable complaint -- "Never Enough Room, Never Enough Time!" -- and I’m not always so generous with guys seized up in psychotic hallucinations. But those are true words. With the irony being, he's wasting my time and I'd rather be somewhere else. The clock's working against me, because I have a lot of things to do. And time is money! But he keeps on shouting and struggling against his helpers, "Time ... Room ... Time ... Room!"

But who can't agree with him? It’s certainly reasonable. But if it’s just something you're shouting to be shouting, it’s unreasonable, and we sit here bogged down at his side. And even if I'm making money, I could be making more money if he'd just cooperate, settle down, and be normal. "We're on the same page, pal, fighting for the same thing!"

Because, really, who among us has enough time? And room? I’ve been room-challenged lots of times. Maybe the garage is too small to hold all my stuff. I’ve shopped for garages and it's a lot of work taking everything you want to keep in the garage to a place where they sell garages. And if it doesn't fit, you have to pack it up again and go to the next place. And as for time? Maybe I had all the time in the world before I wasted it shopping for garages. They need a better way to buy yard buildings.

But here I sit, and I won't have time or money if the rantings of this lunatic are allowed to continue! How could he have such a reasonable point without a reasonable attitude? Therein is the conundrum (mental dishevelment) and the glory (social lenience for involuntary craziness). I had to think, This guy will never be happier than he is right this minute. Go out on top, dude! But look at him, whacked out without reserve, without sense, and if he keeps it up, at some point we'll have to bring it to a sad end. The more lives he messes with, the less patience we have. This just makes us look bad. For society will collapse and fall if the helpers can't end things with some reasonable dispatch!

That's a great reason to be as normal as you can. Because they'll literally threaten you a hundred times with bodily injury but never pull the trigger if it looks like you're progressing toward the goal. But if you're merely out of it, all hope is lost and you're going down. So it's for your own good, even if you're screaming bloody murder, to let some sentience break through. Failing that, give him a hypo, tame him down, put him on a stretcher, and get him out of here!

Let the crowd diminish. "Nothing more to see, folks, let's shuffle off the mortal coil." And get him to the padded cell. That'll put the damper on his fun. And by then -- it's our hope -- he'll be off on a different mental thing, hopefully chasing easier butterflies within his personal mental miasma, and as harmlessly as possible. But it's always better hidden from public fascination, the meds lined up in order, something for the attendants to while away their time doling out.

Is it crazy to think there's never enough time, never enough room? I hope not, because I think the same thing on a daily basis. Time, obviously, there's only now. And if the attendants are indeed doing their thing, that now's a lot more rewarding. And as for room, sure, if I'm bunched up with this guy, and he's trying to fight a dozen guys at once, we're going to run out of room. Just be reasonable, psycho friend ... there, there, asleep in the holding room, now you've got all the room you need!

With time for a quick nap for the rest of us.
Posted by dbkundalini at 6:48 AM