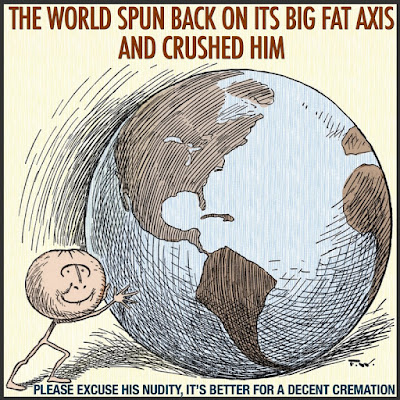 I’ve had days like that, the weight of the world on me. All my vises equally tight. Squeezed like an elephant in a car wash. The pavement of my soul buckling in the heat. Everything I try, there’s something wrong with it. I hit a pothole and think I'm a goner. It’s the end of the world. Or something worse. Maybe a death in the family. A sniper downtown. The grocery store recalling bad fruit. Don’t get me started on a world of problems.

Again, the weight of the world. I wonder how big the actual planet is, how much it'd weigh if you got corralled long enough to step on the scales. Thanks to online resources I could probably find out stuff like that, stuff we used to guess at. Back then we had no idea of the immensity of things. I never saw the ocean till I was an adult. And even then it was such a small amount of it, one horizon’s worth, I can still only imagine how much I missed.

The guy in the picture could be me. I’m not completely bony, I eat normal meals. And my head doesn’t look like a ripening gooseberry, a delicacy I haven’t had in many years. (I prefer them green, and saw some plants on the hiking trail but they didn't have berries yet.) This guy makes me hungry for gooseberries, which to him might be a compliment, since he has the whole world against him, what’s the chances of anyone loving him like I could?

You have to remember, though, this guy — or who he represents — has to die, or has died as of this writing. He could be anyone, although his name is Daniel, like the Elton John song. Leaving tonight on a plane, the red taillights, the whole bit. Taking off around the planet, but it looks like the planet’s got him pinned. It’s metaphorical, of course, like another great song, He’s Got The Whole World In His Hands. 'He’s got the little bitty babies and the big fat grandmas in his hands.'

In Daniel's case, he’s got the whole world in his hands. Which, going by the caption, won’t be a fair fight. He’s about the be crushed by a piece as narrow and insubstantial as the Baja peninsula. Deadly, but not quite as ignominious or painful as the Horn of Africa. The absolute worst part of the Earth rolling on you would have to be Mount Everest. It’d put an eye out if it didn’t absolutely crush you. You’d be saying, “But for the curse of geography lessons, I would’ve had no idea. I could have died more peacefully in ignorance." Half the sorrow is knowing what hit you.

Do I feel sorry for Daniel? Friends, I’ve seen so much death, it’s hard to feel sorry for anyone. I suppose at a basic human level, man to gooseberry, we would’ve gotten along. But with his meager frame, there in the nude trying to grab the earth by the ocean, that’s foolhardy beyond anything I can easily dismiss. Metaphorical, though, we shouldn't forget. I’m so literal minded in two ways: 1) When I’m tired; 2) When I’m hungry. Well, I’m tired of everyone’s problems, dying. And thinking of gooseberries, I am kind of hungry for them. But my family ate them green, never purple or reddish, like Daniel appears to be.

Try again, son. Come back when you're green.
Posted by dbkundalini at 6:00 AM