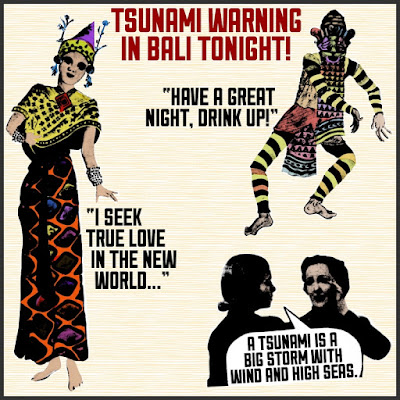 Bali is a province of Indonesia and the westernmost of the Lesser Sunda Islands. The woman is Gede. The man is Komang. That’s all you need to know. It’s far-flung, way out there near the ends of the earth. Unless you’re there, and then it’s the same as my place, the center of everything.

Have I ever been to Bali? I’ve heard people claim I’ve been there, but I don't know why. I think they're just trying to confuse me. Because it’s not something I’d lie about. If I’d been there, I'd gladly confess it. I'd be so glad to confess it, people would run from me: "There's that guy that wants to talk about Bali all the time." But if I did something incriminating there, I wouldn't mention it. I wish I could tell you all the stuff I don't mention. If you never see a particular thing mentioned on my blog, I might be guilty of it.

It'd been nice if I had the kind of job where I was sent by an employer somewhere near Bali. Then instead of strictly taking care of the business, I'd make my way to Bali. The employer might connect the dots and I’d potentially be forced to repay him for a wasted trip. But none of that happened.

So I’m going on second hand information, TV as well as ordinary secret contacts around the world. Secret contacts were indeed my source for the report of a man’s death in Bali, and the show he attended. In which his fate can be traced to the witch doctor.

To me, even the word “witch doctor” cries out something to beware of! We hear the word and we think of someone in a high position of power with witches, delving into the higher mysteries, and now having the diploma to prove it, a doctor's degree. What was his project and his doctor’s degree based on, “Making Tourists Comfortable Enough In Storms” or “Bewitching Foolish Inaction Till It’s Too Late”?

Good thing I wasn’t there, because I might've been susceptible to hocus pocus. I’m very easily led. I’m such a trusting person, mostly because I’m honest and good. And I jump to the conclusion that everyone’s as good as me. Get a clue: They’re not! This guy is Exhibit A. What kind of psycho performs for tourists, then hopes, even conspires, to make them victims? I’d say his diagnosis is off the charts in the wrong direction!

But Kenneth the Tourist knew better than to trust a man with makeup. Even though the slithering dancing girl (Gede) doubtlessly added to his credibility. He’s got that big loin cloth, what’s he packing under that thing? I’m not trying to second guess the fate involved in this thing. But packing that much, I can see how Kenneth could’ve fallen for his act. When the truth is just the opposite. Sometimes the less you pack, the more trustworthy you are. You figure, People aren’t going to trust me, so I have to double down on believability.

Komang's message was soothing. The message was "It’s a great night, have a great time." And Gede backed him up with a plaintive plea for westerners to adopt her and take her home with them to engage in romance and housekeeping. Kenneth didn’t stand a chance. On the other hand, anyone dumb enough to fall for that native lingo got what he deserved.
Posted by dbkundalini at 6:00 AM