Umpire, You're Out Out Out! 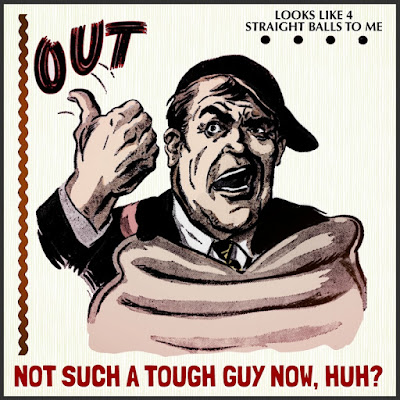 This umpire guy (probably another wannabe) could've very well been one of the umpires behind me in Little League. When I was whiffing at the ball after it’d been in the catcher’s mitt for two full seconds. The ump was screaming “Ouuuuuuuuuuuut” like it was a 16-syllable word instead of the short, simple, and to the point word I see when I write it out. Like that. Notice the simplicity, “Out,” compared to the jaw breaker, “Ouuuuuuuuuuuut.” Big difference.

I really wish I could go back and do baseball better. I don’t know why I was so wimpy. Just didn’t want to do it, I guess, or I didn’t feel near as good as the other players. But my parents still sent me to the park to do my thing, even though I was like, “This is going to be a disaster... Kids with my delicate introversion are better off taking their easel into the closet and painting stilllifes of Dad’s suit. Or Mom’s bra, which would’ve been a more marketable subject. Can you imagine that? I could’ve beat Andy Warhol to the whole pop art happening/Campbell’s Soup Can thing with Closet Wall In Repose and Mom’s Outgrown 38D.

It’s simply amazing how easy life is in hindsight. Meaning, we need to come up with a time machine very fast or I'm gonna die a complete failure. I actually still could be a success but it’d require changing the rules slightly. And even with that I’m not so sure. I’ve seen kids playing baseball these days and it’s just like I remember. They suck. But put someone with some confidence in there — like me today — and I could be the best Little Leaguer in the country. Especially if someone else would run the bases for me. Give me a bat; it’s not just your sex life where remarkable things can happen; it'd be with baseball like it is with sex, I’d swing at everything that moves. (You believe that, right?)

But the past cannot be undone, not with current technology. I was hoping like everyone that with the Large Hadron Collider they'd do something to help. In case you forgot what that was or never knew, you better look it up because I’m not sure either. It had to do with electrons going super speed to prove something interesting about the nature of existence and/or baseball. Maybe studying whether an umpire calling balls and strikes is harder if they're pitched at the speed of light. And even if they haven’t yet worked out all the conclusions, it's definitely known that any ball going the speed of light that you attempt to hit will likely slip by you.

Anyway, none of that does any good for my childhood failures at baseball and the mean-spirited umps we always had. I have one happy memory to share, though, in closing. It was the last game of the season. My team — the Dodgers — were winless, but on that last day — God’s honest truth — our forlorn team managed to win! And the coach took us downtown for a bottle of Pepsi. And who do I see sitting in the booth, moping? The Umpire... Who grimaced at me and muttered, “I'm really gonna get you next year.”

Somehow later that day, though -- a matter of perfect justice -- something came from outer space at the speed of light, avoiding the Hadron collider all together, and took out the ump and his truck with one strike. Rest In Peace, fool...
Posted by dbkundalini at 6:00 AM