Death At The Witching Hour 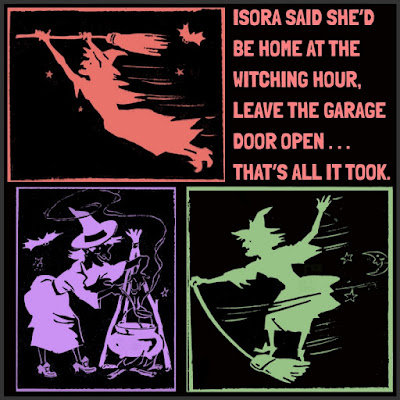 Have you ever had witches for friends? I actually have, in a very limited since. They identified themselves as witches, and while I don’t know the full extent of their activities, I know they did things that modern-day witches do, which has to do with stones, incense, cards, their own texts, nature work, the days of the year, and whatever else. I wouldn’t mind doing it but I already have my own thing, and you should always do your own thing.

Those witches probably have something in common with the whole cartoon, movie witch culture, but at a more serious level. You can see I’m trying to tiptoe around everyone’s feelings and keeping it serious so I don’t end up with enough spells on my head to destroy me. Although, honestly, that’d be a totally interesting way to go. Put that on my resume: “2015-2020 Witch Taunter, taunting various covens and counteracting their spells against whoever.” The problem with that would be I would more likely identify with them, and their enemies would be my own. And I think they/we have a "First, do no harm" vibe these days.

OK, enough boring serious talk about witches. Imagine that, in this day and age we have to pussyfoot around with witches, when everyone knows the actual truth (Wizard of Oz) that witches are "mean and old and ugly." Glenda was even a good witch, but I don't know if water would affect her. Hopefully without the same problems as old shrivel toes or the water bucket witch. If you can’t stand a bucket of water, your other powers are probably pretty thin. A bucket of water and a rainstorm are the same thing. You telling me that old fool witch never showered? Wasn’t her body about the same percentage of water as the rest of us? Maybe not, since water creatures don’t shrivel quite that quickly; they just sizzle and ooze a bit, then melt. And even ice cream melts slower!

If you really could get on a broom and ride, ride, ride, that’d be good. I think I might’ve seen one one day. I was driving by a place decorated for Halloween — probably to attract witch traffic — and there was a witch crashed into a tree, seriously. The tail end of the broom was undamaged, but her smashed body was flat against the tree. One of the saddest things I ever saw. I called an ambulance, then ended up paying $500 fine for what they called a false report. OK, that’s the way it is, never again! Later, I went by a big accident in the country. Three semis smashed to bits, bodies strewn everywhere, blood, guts, and I didn’t phone it in. Might have been witch reenactors for all I knew. And if they didn’t believe me the first time, screw ‘em.

The witch I'm featuring today, Isora, in the pictures, this is a modern witch. She has a garage? How long have we had garages, the last 75 years or something. Anyway, it sounds like she has the same trouble with garage door openers I’ve had. You think it’s open and you drive up and it’s still closed. But when you don’t want it open, say, you accidentally bump the switch while reaching for your keys, it opens every time. The difference between us and her is we don’t go through the door until we see it's definitely open. And we don't usually get killed. That’s real similar to the one I saw wrecked in the tree. But this time a garage door. Bad deal, should’ve been smarter, make sure you’ve got a free path before proceeding, supernatural dummy.
Posted by dbkundalini at 6:00 AM