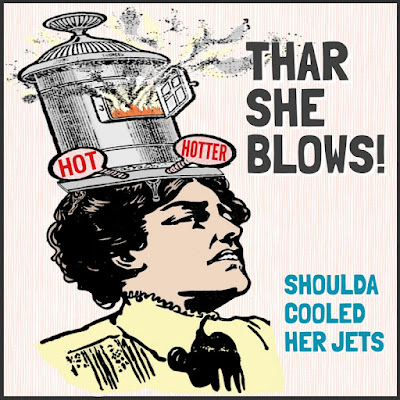 It’s a constant wonder to me — I’m fascinated that I’ve lived so long — that you can die from nearly everything. I read the death news everyday and think, "Yeah, that could happen," meaning to myself. But one of the few things you can’t die from is holding your breath till you turn blue. One of our early fears. Because, as experience tells us, we always choose to breathe. Whether it’s choosing, that’s probably the wrong word; there’s some impetus toward breathing that takes over. And as far as I know, you can't even turn blue willfully. We’re built with an inborn awareness that breathing's good.

Something we certainly can do (and do do) is engage in persistently bad behavior and eventually die from it. For me the biggest problem is worry. I worry about everything and will probably die from it. But at least I'll be able to say I worried about it so much I saw it coming. A murderer leaps out from the bushes and kills you to steal your watch, I didn’t see that coming. But I've actually worried about it even though I don't have a watch. (The guy would settle for other stuff.) Anyway, I'm guilty of worrying too much about worrying too much. And if you pile up a string of worries about what you’re worried about you can see why it could be fatal.

This lady, Marie, the power that was overwhelmingly subtracting from her lifespan was a terrible temper. It’s fine with me that she’s dead, although I would've never said that to her face. Her temper was so terrible, she’d bite your head off if she heard such a thing. So what a relief now to say out loud, "Marie’s dead, and she brought it on herself!" Not suicide, of course, except the slow motion kind that a lot of us commit. Like me from worry. There are coping mechanisms that help, though, mostly reminding yourself that things always seem to work out, whatever the problem.

But with her temper, I don’t think there were coping mechanisms. Having a temper from hell is a thing you apparently have to accept, no refusals. It's ingrained. Picked up, probably, in childhood. The kid who stamps her feet and cries about every disappointment. That's the sort of thing you need to deal with at the time. Although I don’t know how. Reasoning with people with temper (or proto-temper) is often futile.

In childhood psychology, though, I’d guessing you would take away some of the disappointment by granting her wishes selectively. So she'd grow up knowing every wish fulfilled isn't how life works. And that to react with a bad, steaming bad temper is not helpful or appropriate.

But it's not my place today to conduct a full post-mortem on Marie. I’m sure the undertaker was up to his hips in worthless temper dripping out of her, but that’s a science too unpleasant to describe. We’ll just take our place on the other side of the curtain and say — temper or no temper — Marie is now dead, whatever the cause of death on the report, probably listed as a merely physical and not psychological thing, maybe brain implosion. A collapse of the head, now the size of a pea. Like a mine shaft shrinking inward from forceful molecular packing.

It certainly cleared the air for the rest of us. Now we can breathe freely instead of facing Marie's terrible wrath for every little thing. And that’s a good thing, coming not a moment too soon!
Posted by dbkundalini at 6:00 AM