Down In Front, Idiot! 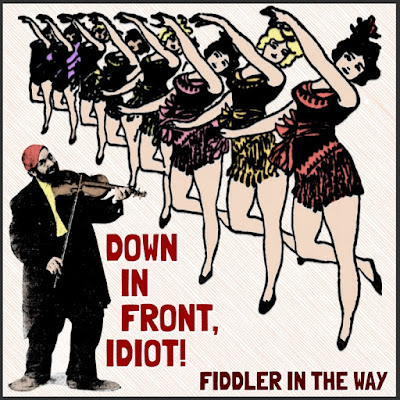 I won't give precise details about the neighborhood I grew up in. Except there were certain female creatures of approximately my age and species known for beating up boys. Not often, you couldn’t find a schedule for their attacks, and there was very little evidence left when the job was done. But it did happen. I was this close to the clubhouse one particular day and came this close myself to dying.

I believe the basic problem then came from the unfortunate fad of giving your kids a clubhouse. If I had kids, knowing what I knew then, they'd never get a clubhouse. And if I heard of clubhouses in the neighborhood, that'd be places my kids wouldn’t be playing. Because I wouldn’t want to see anyone beaten beyond recognition. That’s a good reason! Or for that matter, beatings less severe. One, it can do something to their self image (minor); 2) It can mean certain death, since bruises are nothing other than coagulated blood, that, if it reaches whatever brain they might have could be an aneurysm!

But I do remember a group of boys lead like prisoners to the worst switching of their lives in a clubhouse. The girls had knives and not only had cut switches off trees but had them honed. And no doubt they learned from one another the worst switching techniques before luring them to their near-death experience. I went out of my way to avoid everything about it. I once was in one of the clubhouses and heard girls coming, and but for a fire diversion — tossing a match into a pile of leaves and burning down half the town — I’d be dead today.

Now, let's take a look at our fiddler friend. He looks a lot like our Fiddler on the Roof friend from the movies, if memory serves. He's got a sort of an ethnic headpiece, not an attractive adornment in my opinion, feet like a platypus, a devil-may-care grin, and excellent fiddling technique. But something must be wrong with his hearing. Because those blocked from seeing the dancing girls were catcalling him — nicely at first — to be more considerate of their view.

Then going by the caption, it sounds like someone even called out, asking nicely but with a little more oomph, “Down in front, Idiot!” I don’t like that kind of talk, really, since you can get more honey — how’s that go? The sweeter you are the more people will like you? No, you can catch more bees with honey than with a net? The point is, If you deal with people gently you’re more able to manipulate their behavior, bend it to your will, than if you’re too direct and mean, coming on too strong. Plus bees.

Well, I think they had the right idea. Because the dancing girls, like dancing girls everywhere, also want to be seen. Their legs start just above the toes and go all the way to the promised land, next is the hips and everything above that. Dancing girls, professional women, never know if there’s a great agent in the audience with the keys to the kingdom of show biz looking to feature them in a Las Vegas revue or maybe even a feature film, a Hollywood tycoon.

Whatever they were thinking, things got hairy fast when the fiddler was accidentally kicked, fell and hurt his leg and had to be removed stage left. There’s no telling what all happened then. No one could match one foot with any particular bruise. Then the coagulation. And the problem really might have included sandbags as the dancers averred. You can trip over a few sandbags and buy the farm. Which still doesn't explain the fists. And possibly switches, clubs, and at the farthest extremity (only rumored) a battering ram, now missing.

We may never learn what the range of murder weapons included. We do know Moshe is no longer with us. And until Central Casting comes up with another Fiddler on the Roof guy, one with some good judgment, at least an iota of sense, they're using a CD of fiddling music -- an improvement in my opinion since everyone can now see the girls. And with the improved view, a few of the ladies have indeed been cast in Hollywood, some old time crime films, murder, mayhem, the whole shebang. More power to them!
Posted by dbkundalini at 6:00 AM