A Pacyderm Packs It In 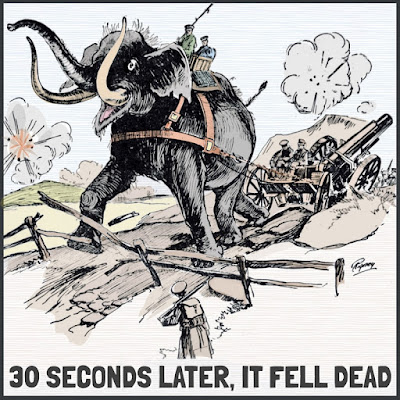 Did you know they used to enlist elephants for military service? Quite the thing. A family would raise one from a calf, then on the day of the Big War would say, “Horray, Jumbo’s all grown up and ready for war! Put a star in the window, let the whole town know we're patriots!” Sounds unlikely these days, I know. When the price of elephant food went sky-high, plus liability insurance, etc., it suddenly wasn't common for a family to raise them. Which is a damned shame, because if we'd been raising elephants, think of all the things that wouldn't have happened. 9/11 for starters.

Of course elephants have always been big, but they were larger than life in the days of the Roman Empire, when all kinds of crazy stuff happened. Back then they didn’t have everything we take for granted, cannons, bunker busters, bazookas, and gun shows. If they wanted to conquer someone they had to unleash an elephant. Yes, they had bows and arrows, swords, and spears. But it was elephants that trampled out the vintage and made the grapes of wrath flow. One big reason, they were hepped up on firewater, hootch, and booze, and went plain loco. Which was a good thing.

Personally, I don’t know entirely how it was done. For me to depend on an elephant to distinguish the enemy from us, that’d take a lot of trust. But it was accomplished like everything else, by experts. They pointed the way for them to go, they fed them a truckload of peanuts, and before you knew it, it was V-Day over the Huns! World War I ended! Hallelujah!

Am I glad we won World War I? Of course I am, I'm always for the home team. But at that time I wasn’t even thought of, nor were my parents, so I sat it out. Later, I took coursework in history in college, but most of the stuff I learned I've forgotten now. World War I, though, was a war to end wars. And elephants' days were also numbered.

It's hard for me to speak ill of an elephant that died. But keeping to the theme, let me think of something ill for this one. Looking at the picture for de-inspiration: What's the matter, you fool, staggering and stumbling like that, breaking through the fence, the cannon tipping over! Next thing you're going to make a mess! And next thing, the enemy's going to say, "That elephant's loco! Shoot the guys on top of it! We'll capture it!" So all that stumbling was a huge mistake, because you took a bullet right through the temple, a terrible place to be shot. Killed instantly. Very bad job.
Posted by dbkundalini at 6:00 AM