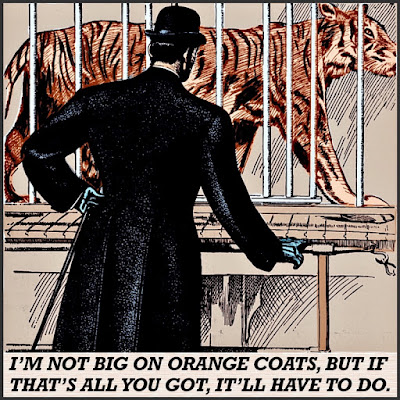 Everyone's a critic these days. Take this guy, Richard. Before he died, he was pretty vocal with the attitude, "I make good money and have a good life, a life I'm proud of. I worked damned hard to carry a decent walking stick, these gloves are the envy of the world, and this nice coat, it's the nicest richest coat anyone's ever seen!" Then he's in the zoo and sees a tiger and thinks, "Nature, it's been done to death. Sure, you're a tiger, you have a majestic orange coat, big deal!"

These days we're very appreciative of animals. I've frankly always been in awe of the bigger animals, tigers, lions, etc. But of course I can see the point of a guy like this who's worked hard. His coat wasn't just default on his back but acquired through a good work ethic and following through to achieve various goals, to have a nice coat and gloves. Still, it's distasteful to be so vocal about it; I mean, why brag? Most of us work hard and have clothes to wear. Tigers have their own system, we have ours, there's no competition, no reason to be jealous or proud. And, frankly, no reason to even give it a second thought.

I hate to say how Richard died. Except it's pretty obvious. If anyone reading this is blown away at the fact that the tiger lashed out and killed him, don't be. That's nature's way. You get too close to the cage and you've got your fat lip full of nasty sass, nature has a way of leveling the playing field. Fangs, claws, muscles like steel, the ability to transfix its prey with eyes staring into one's depths, purring, then lashing out. Richard saw the bars and took false security from that barrier. Big mistake.

Maybe this isn't the time to compare coats and see whether Richard had a point. I honestly don't see a coat like his being that great. It looks way too thick. Yes, it'd feel good if it were 30 below, but that doesn't happen very often. In average temperatures, you'd roast in that coat. It's thicker than anything I'd like to wear. I can see myself immediately shedding it and maybe even giving it to Goodwill. Or throwing it away if I didn't want to drag it around. Summing up the point, I wouldn't be caught dead in a coat like that, unlike Richard.

His attitude puts me on the tiger's side. It doesn't matter if Richard wasn't "big" on orange coats. The tiger has the coat by nature. He can't help it. It's not a fashion statement, it's his body and natural color. Orange doesn't come and go in or out of style. It's like if we were all born with red hair. It wouldn't be extraordinary or noteworthy, that's just the way it'd be. That the tiger has an orange coat, what do you expect? (Although there are some with white coats.)

Richard didn't know we were watching him so closely. He stood there bold as bandits, a very assured pose, posh blue gloves, a walking stick like a javelin, and a derby hat custom-fitted to his assuredly noble head. The casualness of his demeanor betrayed not one whit of his nasty personality, which erupted putrid as anything can be, his filthy words showing a complete disregard for nature. To be succinct, I'm not personally ruing the judgment of fate against him.
Posted by dbkundalini at 6:00 AM