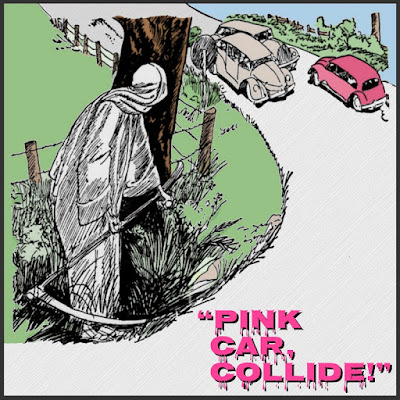 I myself was in a traffic accident once -- I'm just the average guy --  so I know how they swing, drivers, and how it goes and some of the hazards of the road. In my case, I was an unimpeded non-threatened single driver simply running into a utility pole. No one was killed, but injured.

At the time I had no idea of the ins and outs of accidents or so-called accidents. Which upon greater experience I’ve come to discern as incidents arranged by malevolent forces. If I may be so bold as to categorize Death as a malevolent force, and I'm not sure that's wise. If I feel any tightening in my throat in the next few minutes I'll retract the statement. But just take a close look at the graphic for all the evidence you need. Death is right there in one of his distinctive costumes, replete with the scythe prop he often carries. Looking nicely eerie with no contrast between the cloak and his eerily stark white pallor. For all I know, he may have been invisible. Which gives more of the element of surprise and keeps bad press down to a minimum.

The main point is Death is clearly portrayed as present just prior to an accident, one that resulted in at least one fatality. Like my accident with the pole, the scene is from a time before airbags and even people regularly buckling up. I wasn’t buckled up. That far back, it was like the Wild West of Personal Behavior. We didn’t give one second of thought to the consequences of anything. I regularly played guitar while driving. Kids got cigarettes for their first birthday. We literally had a shotgun for an alarm clock. Kids died early then, sometimes before breakfast. And as for the more important problem of property damage, our house was nearly blown away merely from hitting the snooze button.

The scene presents itself, then, and thankfully a sketch artist was there: It starts off a pastoral scene, the world’s safest road, except … Where Death is, Death always follows. Someone was either not looking ahead or simply being wanton in her handling of the car. She floors it, apparently unaware it was a one-way road going the way she wasn't going. We don’t know every detail, but Death is obviously pulling the strings. She flips that cute little pink job around the corner, oblivious to danger, with one of the worst devil-may-care attitudes I believe I've ever seen so hideously displayed.

But I’d like to step back in time a minute or so. She left home, thinking to herself, “I’m in a massive hurry. I will cut every corner I can to get there in time. To hell with the danger! To hell with the lives of other innocent victims along the way! The road is mine, I will take my half out of the middle! Yes-sir-e-bob!” And she had a dumb way of nodding her head, bob-a-bob. So knowing her exact thoughts, I'm not at all sympathetic. With her attitude there was a definite bad end in the offing. The person of Death couldn't have arranged it more deviously. In this case he had the perfect foil, so unthinking, so uncaring.

Her name was Irene. As in the song “Goodnight Irene.” And she was killed outright, with the others injured really beyond recognition. Each family swore they weren't theirs. At least one party was happy for the Irene’s demise, Death himself, whistling this terrible sentiment: “Good night, Irene, you should've driven more responsibly, but I'll see you in my dreams!”
Posted by dbkundalini at 6:01 AM