Not Afraid Of Grizzly Bears 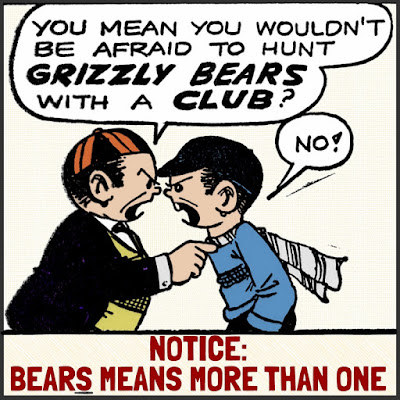 I haven’t figured out yet what happened, the system of “more-enlightened” times. With hunting completely out. And gigantic elephants, tiger, lions, all the way down to the smallest things, rabbits, squirrels, and even rodents completely running amok. I remember, not very long ago, when a man could “put food on the table” by his own stealth. Sitting in a tree waiting for a deer. Seeing a rabbit in the ditch and hoping it didn't move till you got your .410 shotgun assembled.

But life is full of contradictions, so in the abundance of animals going to waste we continue raising and slaughtering others. Even though scientific people who don’t weigh as much as the rest of us — when they pick their teeth it’s always bio-engineered scraps— tell us meat is not only unnecessary but actually harmful. Say what you want about animals, as mean as they are, they make up for it by being delicious.

Anyway, it’s obvious true to a point that there’s danger in everything. And yes, we’re all going to bite the dust someday. If it comes from a lifetime of eating, what’s the beef? We’re hungry, of course we’re going to eat. Death is a fact of life period. Nothing to be denied, of course, but nothing to be so afraid of. I get lessons from friends passing. Whatever they died of, I avoid that for a week or so. If they had an unpleasant pallor, I use rouge. (I’m not a female impersonator all the time, I just like to look alive.) And if it’s someone close, I cry like a banshee. Until the pastor steps in, touches my wrist and says, “He’s in a better place.”

Still, friends don’t like friends to die. But we’re not beyond challenging each other. “If you’re a man, do such and such," take this challenge, live your life on the edge, and prove you’re tough enough to go the distance. When we were kids, though, that was the worst thing, being a wimp. It's illustrated there, the whole gamut of childish behavior. Feeling like you can do anything. You actually can, almost, if you get lucky. But when you grow up you realize, just because Superman jumps off buildings and is OK, there’s no guarantee you can. If there's doubt, the default assumption has to be, You can’t.

So they ask the kid, "You wouldn't be afraid to hunt grizzly bears with a club?" No. But if I kill one, that means I have to take on at least one more. Then the second grizzly swipes a big paw out and takes the kid's head off. That kid was stupid. Don't do it. And now that you've done it and died, don't do it again. There's nothing you can do about him. Dumb kid, real stupid. But pretty good skills, if you as a kid could actually kill the first grizzly. That's something to talk about, big praise.

As for the rest of the kids, his funeral meant a day off from school. So there was something worthwhile about it for everyone.
Posted by dbkundalini at 6:00 AM