The Rich Shouldn't Risk Their Life 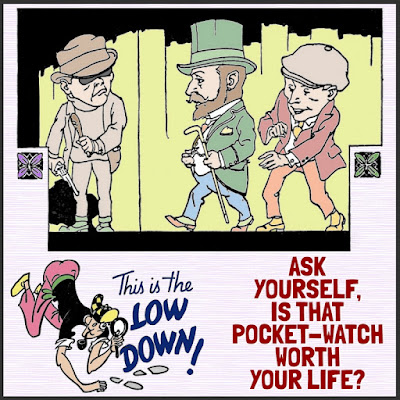 I had this idea for my Master's thesis: "The richer you are, the less you should risk your life protecting what you have." They said that was a given and the thesis not practical. I tried bullshitting them but they wouldn't budge. So I did some gas-lighting to prove my point, putting a great deal of psychological pressure on some of the top donors.

I was relentless over months with scary faces at their windows, creepy phone calls, and I even broke one guy's leg. The fear was so horrendous there were three or four deaths the first year alone! The university, always begrudging, finally saw the light and the degree's on my wall to prove it! But the families sued and the university lost so much money and prestige it sounds like they're sorry they ever heard of me.

But I hate crime and that's what I'm here for today. I really hate crime. Please don’t tell any criminals that you read this here, because they also seek revenge, but I wish they'd only give criminals “One strike and you’re out!” I know it changes the old adage about three strikes. But with the world's population exploding and crime everywhere, we can’t afford an unlimited number of three strikes. Change the rule: Just one!

It looks like the only good luck society ever really has is with the non-criminal population, and we're all dirt poor. We haven’t got anything to steal, so it's no use for criminals to attack us. Yes, they can break into our hovels and take our chewed up old blankets — my dog chews blankets and everything else — but I’m pretty sure there isn’t a pawn shop in the Big City that sells used blankets. My most valuable possession is a half gallon of paint from 10 years ago, but, again, it takes a lot of old paint to make one good gallon. With the colors always ending up potluck.

I'm definitely poor. I don’t take much comfort in things in my life; I can’t afford to. But at least I have some comfort knowing there are poorer people yet. Do I feel badly for them? I actually do. I was bit by the compassion-bug when I was a kid and it's a lifelong infection, because sometimes I feel guilty that my car runs and my backseat isn’t on my porch. But it'd be comfortable and very weather-resistant thanks to the plastic covering I bought with my inheritance after Mom and Dad passed.

Yes, even though crime usually affects people better off, I still hate it. Another reason, I watch the evening news, and I hate hearing about criminals breaking in here or there, robbing places, abducting people, dumping their bodies in the river, and all the rest. I cry out, “Can the police do nothing right?!” It totally screws up the fishing. Still, they speed by all hours day and night with their sirens. How about leaving the sirens off and sneaking up on people. This is one of my peeves. When they hear the sirens they drop the evidence and sneak out the back. What happened to stealth? Even the military has stealth planes. Something to try...

I’m looking at the graphic of Sir Reginald, one of the richest guys in town. He was worth a lot of money, going by how much he gave to every museum in town. But he didn’t keep it quiet either. His attitude was, “I’m filthy rich, jump me in the dark!” He probably took the dark way home just to brag about it at the Admirals Club. But in this case, his luck ran out. He was not only robbed but brutally murdered, bamboo shoots shoved in his hair follicles. Reggie was a rich fool, having every advantage but blowing it for bragging rights.

But he still got the last laugh; his family crypt's about the size of the mall. With lots of legroom, which he deserves, being so rich.
Posted by dbkundalini at 6:00 AM