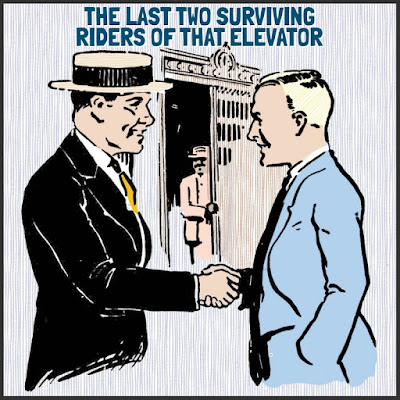 I’ve had some experience with old elevators. Not much, but it was memorable. I’m thinking of an elevator in a fleabag hotel from 1898 or something, with a rickety old man pushing the button for us and taking us to our room. The guy and antiquity of the place was like something from a time travel movie. This guy was strictly colonial, ages ago, and obviously the last remnant of a generation that now is a'moldering. You literally saw the floors slowly passing by.

It used to be common to have an elevator operator, and there’s still places that do that, Cuba comes to mind, most likely. They patch up cars from 50-70 years ago and keep them in decent shape, they probably do the same with elevators. I think of Cubans as connoisseurs of the past, mostly because of the old cars, but if they’re equally conserving of the bygone days of elevators, more power to them. And probably New York, I don't know.

The key thing is staying on top of the thing, right? It doesn't matter if it's Serial Number 0000001, if you keep it in good repair. You never want the cable rusted through, though, so everything needs to be checked maybe annually. Get up there and count the threads of metal. And if a few are sheared off or rusted through, get the fix-it guys pronto. Certainly my hotel was a miserable throwback in a miserable neighborhood and must have been completely demolished by now. Allow me to polish the apple of pride on my sweater that I had the foresight and good sense to stay that one night only. The operator there surely checked out on life soon after, but I have no idea if he took the plunge of death like this guy.

Our poor deceased guy today, in the graphic, is Gus the elevator operator. What can we say about him? We hope he didn't leave a bunch of dependents. We hope his wife was set for life. We hope a lot of things. Like they say, running an elevator you have lots of ups and downs. I hope he had a lot more ups in his life, and that in the things he desired life always stopped on his floor. It bothers me to think of his last moments of terror when the thing plunged to the basement. If he only could've timed it just right, then jumped in the air just before it hit... If I could’ve given one piece of advice to the owner of the hotel, it would've been, They’re doing great these days things with escalators.

But back to the guy. Look at him there in his silly orange costume, a foolish smile on his face. He’s holding the door open because he likes the look of satisfied riders. They rode his elevator, two brave but foolhardy guys. They’re shaking hands and wishing each other a good day. As Gus closed the door, the cable down to its last frayed strand, he should've had the good sense to run as fast as he could. Pretty bad decision not to. Instead, he set his ignorant course to tempt fate one time too many. Leaving him to disengorge one last cry of terror, but what it was was lost to posterity. And who really cares what it was? We're never going to know. We only know it was completely in vain, a noise piercing the air and wasting everyone's time who tried to decipher it.
Posted by dbkundalini at 6:00 AM