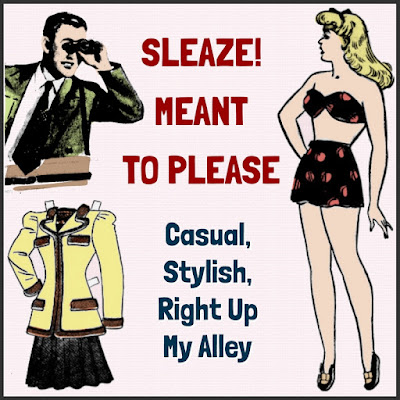 That was Donny. Donny’s no longer with us.

The province of the word “Sleaze” to describe good-looking women is a matter of conjecture. But I think I know how it works. A site called Urban Dictionary has an example of its usage: “Man, that girl Ashlee a sleaze…” Which sounds very modern.

I first heard “sleaze” used this way in the early '70s with guys I worked with. They weren’t cosmopolitan or even remotely sophisticated concerning the latest lingo, let alone urban dialect. But we’d be on break downstairs, lying on some equipment with a good view of the sidewalk, looking up at people passing. For my co-workers, mostly one guy in particular, any old man walking by was a worm or wormy. Any physically attractive lady, going by the usual standards, was a sleaze or sleazy. Worm was a put-down, sleaze a great compliment.

OK, I’ve got that bit of archaeology out of my system. I hate my memory. There’s all kinds of useful things I could remember — the Preamble of the Constitution, Mom’s Recipe for Noodles — but, no! Still, it’s interesting to see the Urban Dictionary has it the same way, although the dates of that usage aren’t given. And I won't even wade into Wikipedia, because, really, who cares? Language comes out of people’s mouths, they got it somewhere, agreed to it, and if they say it meaning something particular, fine. If they say it and they’re killed, next time keep your damned mouth shut…

Seriously, look at this idiot. Donny’s obviously farther from Betty getting dressed than it appears in the picture since he’s using binoculars, but someone picked up on what was going on. And whether it happened right away, jumping him, or they waited till later at just the right time, I’m not a repository of everyone’s movements. My mission is not to sketch out precisely when they pulled him down an alley crying, or how fast he disappeared into one of those abandoned warehouses with no windows, or whether Betty had something to do with it — I really don’t see how she couldn’t have. All I’m doing is stating the basics of what happens when you say the wrong thing and when you get involved where you’re not wanted. In this case, a completely carnal case. Donny used his binoculars to see her getting dressed and/or undressed. He fell victim to the standard insatiable libido. If only he'd had brains like me, he would’ve gotten as much as an eyeful holds and run for home.

Now I'm much older and know it doesn't really do you any good to see such sights. Look away! It's just a point of frustration, not glory, until you do everything right, 1, 2, 3, and end up going out for dinner. And you definitely need to keep "sleaze" words out of your vocabulary. Step it up, guys!

Whoever you are, just like Donny, there's someone with just the right mindset and drive -- hearing an apparent slur like that -- who could still actually kill you for it, which is impossible to live down. Donny's best course of action, if he'd had the chance, would’ve been to change clothes, toss the binoculars, and not be found again till he was on the other side of town. Like me, anytime I feel threatened somewhere, that’s one place I won’t go again till the cows come home or later. Till the donnybrooks run free of donnys.